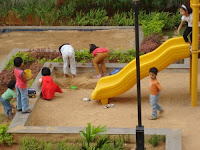 Let’s first understand the context a little more. This technology offshore center located in is part of a global financial services firm. It has 1000 engineers responsible primarily of the maintenance of mature technology / products. Their day-to-day work involves fixing bugs raised by customer and adding new features whose design has been worked out by experts at the headquarters. The engineers and managers aspire to own products end-to-end. However, there is a huge chasm between the aspirations and perceived capability by their parent organization. Here is what happened starting February 2008.

There was a change of guard at the top of the parent company and in his welcome speech the new president mentioned “international trading” as a possible new area the company might enter. Video of this speech was available on the corporate intranet. A manager at the offshore center, let’s call him Ajit, watched this video and “international trading” caught his attention.

In the next few days, he gathered 7-8 engineers together, some with business background, some with back-end technology knowledge like Oracle / mainframes and some with front-end expertise like .Net / user interface. Each of them decided to study implications of supporting “international trading” from their point of view. The group met once in two weeks for the next three months mostly studying the relevant systems and running small experiments and sharing the results.

In June 2008 center got a call from onsite saying that they are kick-starting a project on “international trading” and checking if they have any inputs. With three months of solid experimentation the boys had more insights than what the onsite could believe. Pretty soon two of the engineers joined the team onsite in the conceptualization phase. The product went live this month. It is no surprise that one of Ajit’s team ended up owning a sub-system end-to-end.

Ajit is a middle manager (not a VP) and the sandbox they created with “international trading”, a “back-end” and “front-end” technology as constraints wasn’t expensive. In fact, all the experimentation happened by stealing time from the regular hours and more often putting in extra time. Ajit certainly played a key role in both identifying an opportunity and exciting a bunch of engineers around the opportunity.

What if the “international trading” project never got started? Well, unless you have a Ratan Tata or Steve Jobs with you, systematic innovation is a portfolio game. You need to ask, “Do we have a few such innovation sandboxes active with potentially high upside?”
Posted by Vinay Dabholkar at 11:51 AM