Eighty years after Ranchhodlal Chhotalal founded the first textile mill in 1861, Ahmedabad’s mill owners were still dependent on experts for technical guidance. By 1940s the industry had grown to run eleven million spindles and 195,000 looms. Finally the mill owners under the championship of Kasturbhai Lalbhai established Ahmedabad Textile Industry’s Research Association (ATIRA) in 1947, a co-operative research institute modeled on the lines of research associations in . Scientific experiments at the lab lead to process and product improvement ideas that promised savings and productivity gains to the tune of several crores. However, the ideas were met with huge resistance from the technicians and the mill owners themselves. What could be the reason? Could it be possible that the early interventions were not robust? Let’s explore.

It all started with Kasturbhai asking Vikram Sarabhai to study the structures of industrial research institutes in the and with a view of implementing them at home. Vikram was just back from his second stint at . He was an apt choice because he was a trained scientist and one of their own – the son of one of the city’s leading mill owners. ATIRA, ’s first co-operative industrial research lab, was started with an initial contribution of Rs. 50 lakh from Ahmedabad mill owners. The initial staff of four – a statistician, a social psychologist, a high-polymer chemist and a physical chemist – was a unique cross-functional team. Vikram was the ring-master. Over the next few years he hired seventy people, most of them young like himself, with no experience of textile manufacturing.

By February 1952, a pilot mill had come up equipped with machinery and facilities for simulating the actual workings of a mill. Studies began to tackle the problems which were assumed to be endemic till then by the industry. One study confirmed that low productivity in spinning was due to inadequate maintenance of the machinery and absence of process controls. Another study proposed methods for reducing cotton wastage. Tamarind kernel powder, an agricultural waste product, was tested as a substitute for starch. Suggestions were made for improving ginning and weaving techniques, decreasing humidification costs, conserving energy, and so on. An estimated Rs. 20 crore, much of it in foreign exchange, was to be saved these innovations over the next two decades. And what was the result? Vikram’s methods were openly attacked in board rooms and technicians in the mills were convinced that ATIRA staffers were spies for the management. What went wrong? After all it was the same mill owners who had funded the initiative.

Well, it is not hard to see that these early interventions weren’t culture-friendly and hence non-robust. First, Vikram and ATIRA challenged the conventional gut-feel based decision making of mill owners and advocated scientific methods which were totally alien to them. Second, it emphasized independent research to home grown ideas from within the mills. It is hard to believe that there would be no bright spots in the form of ideas and practices in the century old industry. ATIRA could have identified and amplified these as a starting point. This would have built mutual trust and prepared the mills folks for accepting more radical ideas. Third, all the ATIRA staffers came from outside the textile industry and hence it became hard for them to find champions inside. ATIRA could have encouraged participation from technicians.

Over the next few years Vikram & ATIRA learnt about ‘the human problems involved in introducing change’ with significant contribution from Dr. Kamla Chowdhry, who was the head of industrial psychology division at ATIRA. 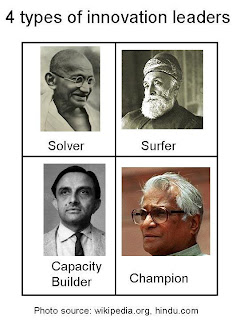 Story of Konkan Railway of India by E. Sreedharan
Posted by Vinay Dabholkar at 6:36 PM 7 comments: