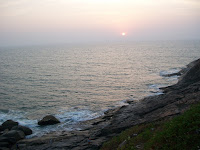 Ocean-wave is an ancient metaphor used to explain the nature of human existence especially in non-duality literature1. According to this metaphor human life is as independent as a wave on the ocean. Ocean is the invisible vastness and the waves are you, me, tree, table and every form that arises and goes back to the ocean of vastness just like a wave does. Most of us find it difficult to relate to this metaphor. In the past few years, another phenomenon called dancing droplets is creating ripples among two communities in physics: hydrodynamics and quantum physics. In this article, we will explore if this dancing droplet phenomenon does any better as a metaphor to communicate the non-dual nature of existence.

First, let’s see a few reasons why we find it difficult to believe the ocean-wave metaphor.

1.  As I walk around the room, there is a distinct sense that I am an independent entity called “Vinay” which is choosing to walk around. Wave, on the other hand, is so tied to the ocean, it hardly seems to have any independence.

2.  I remember past events. E.g. I can remember how I walked around in the house say from a sofa to the kitchen to the dining table etc. If I wanted I could retrace the path as well. It doesn’t appear as though wave carries any memory and I am not aware of any waves that can reverse their paths (go backwards).

In summary, lack of (1) independence (2) memory and (3) meaningful response seem to differentiate “Vinay” from a wave. And that is why it is difficult to believe that life is like a wave on the ocean. Perhaps there are more differences. But for now let’s stick to these three. Now, let’s turn to dancing droplet and see if it can do any better than ocean-wave metaphor.

To appreciate the dancing droplet metaphor, it would help to watch this video titled "Is this what quantum mechanics looks like?". It uses jargon from physics. But don’t worry, we don’t need the physics jargon to appreciate it as a metaphor.

In the video we can see that there is an oil bath which is vibrated by a speaker. Using a toothpick, Derek Muller is generating droplets. Now, these droplets don’t seem to recombine with the oil bath immediately and keep bouncing. This happens because of a layer of air between the droplet and the oil surface which doesn’t become small enough size for it to recombine. Here are a few facts about this experiment that are of interest to us:

Note that the information field created by the successive bounces of the drop is active. It pushes the drop around. This notion is different from the situation when information is stored in memory but not active. In fact, we can say that the meaning of a situation at any point of time for the droplet is the activity of the information2. i.e. slope of the wave is the meaning.

Now, let’s ask, does this droplet have an existence independent of the oil bath?The answer is “no”. A droplet’s “life” is determined by the information field which, in turn, is created by the history of the bounces. However, if we magically make the information wave invisible then it may create an illusion that the drop has independent existence. Now, let’s see how this dancing droplet phenomenon compares with human existence.

When we respond to a doorbell, we are responding to the information field influenced by another person who pressed the bell, which in turn, could be result of an online order I made on the click of a button earlier. In fact, we can say that our daily activity is guided by the information field around us. Emails, TV, WhatsApp, Internet, newspaper, people are contributing to the vast information field and the field, in turn, is guiding us. This information ocean remains largely invisible to us except for the ripples which show up in the form of TV news, WhatsApp messages, cars passing by, doorbell ringing etc.

Now, let’s look at the similarity of meaning as the activity of information for the droplet and for us. Let’s consider our thought as a system of conditioned and shared reflexes. If the doorbell situation appears threatening to me then a set of reflexes are fired (say, of conversing across the closed door to find more about the visitor). On the other hand, if it means “not dangerous”, then another set of reflexes would be fired automatically to open the door. Thus what appears to be a “choice” seems hidden in the programmatic nature of the conditioned reflexes. Thus information field is constantly acting through a set of reflexes, which in turn, is conditioned by experiences. In short, each of us is bouncing and influencing the vast information ocean and that information ocean, in turn, is guiding us.

Now imagine that the droplet becomes conscious – i.e. it gets a sense of “I am”. Moreover, let’s imagine that the oil bath is largely invisible to the drop. And it mistakes this awareness of “I am” with its own boundary (a drop of 1mm radius). So it might “think” that it is independent and making “choices” about where to go next depending upon the situation. We are doing the same.

1. Reference to ocean-wave metaphor is found in Ribhu Gita, one of the ancient Hindu scriptures. Ribhu Gita was advocated by Ramana Maharshi, a 20th century spiritual teacher from South India. Reference to ocean-wave metaphor can also be found in “I am that” a compilation of talks with Nisargadatta Maharaj, a 20th century spiritual teacher from Mumbai.

2. If you want to read further on “Meaning is the activity of information” I suggest the article: “Meaning and information” by David Bohm.
Posted by Vinay Dabholkar at 6:03 PM No comments: