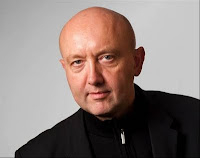 Thanks to Prof. Rajeev and Supriya Dey of IIMB, yesterday I got an opportunity to meet Prof. Weinberg over lunch and subsequently attended his presentation “Design thinking: Looking beyond obvious” at IIMB. Prof. Ulrich Weinberg is the director of the of at Hasso Plattner Institute, . The school is modeled after D-school of Stanford. According to Prof. Weinberg at HPI D-school you get no credit points, no grades and no certificate worth any official value and yet within four years of its founding it has students from 70 disciplines and 20 nations. Natural question is: What is going on there? And what exactly do these students do that they value learning experience over credits and certificates?

The students participate in 1 hr, 3 hr, 1 day, 3 day, 1 week, 3 week and 6 week workshops / projects which progressively prepares them for the 12 week final project. Every project starts with a cross-functional team of 4 to 6 students and students rotate after every project. With students coming from disciplines as varied as art, history, medicine, engineering, psychology, law, forming a cross-functional team is not a challenge at HPI. The faculty works with industry-Government partners to generate a set of challenges. One such challenge came from DHL: How might we transfer packets from point A to B in the inner cities of future where no cars are allowed? , , Mumbai are good candidates. If you feel that the challenge statement is simple looking, mind you it would have taken several days of work for the faculty members to work with DHL to arrive at the crisp looking statement which reflects user needs and pain points.

Out of the 12 weeks, half the time i.e. 6 weeks would be spent in understanding, observing and synthesizing the experience. This means going to the inner cities and observe how things work. Students observe how people walk to bus stops or train stations or cycle. In the DHL project the team was inspired by the workings of Dabbawalas of Mumbai. The most difficult part of this first phase is to switch your solution engine off. This is especially harder for engineers who are so used to solving problems. One of the deliverables is the creation of a detailed persona of the customers whose pain you are addressing. In the DHL case it could be thirty-five year old Chris or a twenty-two years old Sangeeta, a resident of the future city who either works for DHL or partners with DHL in moving the packet forward.

The next phase consists of ideation, prototyping and testing. Since the team has spent enough time in the field, ideation generates hundreds of ideas relevant to the problem. The school has created spaces with movable trolleys and white boards that help these teams in brainstorming. Every day there is a three minute presentation to the rest of the class on your prototype and you get immediate feedback. Weinberg says, “No other feedback can be as powerful as this inputs from your colleagues and faculty”.

The team working on DHL problem came up with an idea of citizen participation in packet delivery. They named it Bring.buddy. It taps all the consumers moving through a city each day, whether via bike, public transport or on foot. Interested participants indicate their travel route for the day using a downloadable smartphone app; a text message then lets them know of any packages needing delivery along the way. When there is such a package, the participant picks it up from the local kiosk where it's waiting and delivers it as they go about their daily business. In exchange for their help, the program rewards them with points that can be redeemed for free train tickets, merchandise coupons or CO2 credits. Check out the YouTube video BringBuddy.

Bring.Buddy created so much buzz in trade show and even in that people started asking DHL when they are implementing it. Finally DHL has decided to pilot it in along with the student team at HPI. Whether the service reaches market is anybody’s guess. However, can you doubt the learning the students are getting in the process?

If you want to get a glimpse of what design thinking experience might look like, I suggest watching 3-part video of Ideo’s Deep Dive.
Posted by Vinay Dabholkar at 11:00 AM No comments: 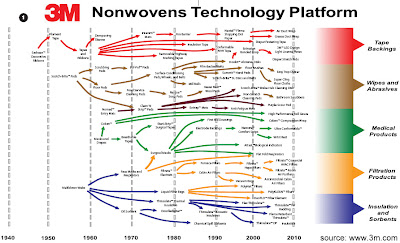 A typical technology platform far outlives the first product which uses it. One of the classic examples is 3M’s Nonwoven technology platform. Originally used in making ribbons for decorating gifts, the platform over seven decades has been used in cleaning pads, surgical tapes, drapes & masks, fasteners, floppy disk liners, absorbent material to combat oil slicks, “metered” paint rollers for home improvement and sound deadners in cars. What does it mean to develop and manage a technology platform like nonwoven? Let’s look at the story in brief.

Al Boese didn’t have a high school diploma and started his career in 3M as a mail boy. In 1938 his boss in 3M’s tape lab, Dick Drew, suggested that he might not be cut out for technical work. Perhaps, Drew counseled, Boese should take time off to find a different job. Boese hung around the lab anyway. One day Drew off handedly mentioned that 3M specifications called for an inexpensive, noncorrosive backing that was fibrous, but not woven, for its popular electrical tape. Rather than hunt for a new job Boese found the best library on fibers at the ’s Home Economics Department and he spent the summer there.

“One day I was walking by the rubber colander in the tape lab,” Boese said, “I stuck a little tuft of acetate fiber in the colander. It heated the surface of the fibers and bonded them together. That was the opening to make nonwovens. Heat and pressure.” Boese started experimenting with this process and set up a small lab called Carfab Lab. Boese’s new process didn’t produce a better backing for electrical tape, but gazing at a department store one day in the mid-1940s, he had an idea. May be, if the new nonwoven material was dyed and sprinkled with color flecks, it could be used in decorative display. Or why not slit the material into strips and make ribbon for decorating gifts?

Boese’s early attempts at ribbon failed as it was structurally weak for wrapping packages and it wasn’t very attractive. “It was obvious to everybody that we had a product failure,” Boese said. In three years the ribbon brought in about $800,000 in revenues and the losses totaled $200,000. Boese was given three months to make it profitable and he did. The new product, 3M Sasheen decorative ribbon, was a hit when it was introduced in 1950s, along with a companion product, Lacelon ribbon.

From ribbon, 3M “married” nonwovens to abrasives in the 1950s to produce Scotch-Brite scrubbing and polishing pads, floor maintenance supplies and industrial polishing materials. A decade later, new dampening sleeves were made from nonwovens that made offset printing much more economical. Disposable surgical face masks and Micropore surgical tape opened the door to other nonwoven medical products.

There were some disappoints along the way, too. 3M never successfully developed nonwovens for book covers, draperies and window displays. A novel product called Skimmit was heralded as the easy way to skim oil off liquids like soups, but consumers never thought so. Early attempts at creating comfortable shoulder pads for clothing fizzled.

Nonwovens had become a part of so many 3M products that a was created in 1983 to offer technical knowledge and expertise across the company. By then, about 10 percent of 3M’s business or nearly $1 billion in sales from about 20 divisions represented some form of nonwoven application in products ranging from diapers to diskettes. By the late 1990s that percentage had grown to 15 percent overall and sales of about $2 billion.

Note: I am looking for an example of a technology platform that has evolved in India over a decade or two. In case you have any information, do let me know by either writing a comment on this blog or by sending email to: vinay at catalign dot com.

Every organization has a unique culture and any act to bring about a sustainable change needs to be sensitive to the existing culture. Gandhi, in 1915, either didn’t understand this yet or he hadn’t fully internalized it. Gandhi had a four day visit to Shantiniketan in February 1915 a month after his arrival in . During this visit he conducted a self-help experiment with all the students and teachers. Like his visit, the impact of the experiment was short-lived. What was the experiment? And why did it fail? Let’s explore it here.

In 1904, Gandhi had established an Ashram in in a town called about 14 miles from . In 1915, when Gandhi returned to many of his Phoenix Farm associates followed him as well. It so happened that the party arrived before Gandhi arrived and found a home in Shantiniketan. After visiting Gokhale in Pune and meeting relatives in and Porbandar, Gandhi proceeded to Shantiniketan.

The phoenix family had been assigned a separate quarters at Shantiniketan. Maganlal Gandhi, Gandhi’s close associate in Phoenix Farm, was their head, and he had made it his business to see that all the rules of the Phoenix Ashram should be scrupulously observed. Among Gandhi’s friends Andrews and Pearson were also present.

Soon after his arrival Gandhi mixed with the teachers and students and engaged them in a discussion on self-help. He suggested to the teachers that, if they and the boys dispensed with the services of paid cooks and cooked their food themselves, it would enable the teachers to control the kitchen from the point of view of the boys’ physical and moral health. Also it would give lessons on self-help to the students. Some nodded their head tentatively, some appeared more enthusiastic. Gandhi invited Rabindranath to give his opinion. He said he didn’t mind it provided the teachers were favorable. To the boys, he said, “The experiment contains the key to Swaraj”.

Thus started an experiment involving the entire community of 125 boys and their teachers. Boys were running the kitchen, handling the garbage, cleaning the latrine, sweeping the ground and as Gandhi’s biographer Louis Fischer puts it, “forsaking the muse for the monk”. Pearson was looking after the cooking part and Nagenbabu was looking after the sanitary cleaning. It was difficult for the students. Some began to show early fatigue. Cleaning of vessels was especially tedious. A group of students played sitar next to the kitchen so as to make the task feel less cumbersome.

Gandhi had to leave Shantiniketan abruptly to attend Gokhale’s funeral. And the experiment was stopped after some time. As Gandhi notes in his autobiography, “I am of the opinion that the famous institution lost nothing by having conducted the experiment for a brief interval, and some of the experiences gained could not but be of help to the teachers.”

Gandhi and Tagore were united by their love for and mankind. However, they were very different personalities. In the words of Louis Fischer, “Gandhi was the wheat field and Tagore the rose garden, Gandhi was the working arm and Tagore the singing voice, Gandhi was frugal and Tagore was prodigal”. At Shantiniketan, Tagore’s pupils sang and danced, wove garlands, painted sunrise and made life sweet and beautiful. Gandhi’s experiment essentially turned the place upside down. It is no surprise, it was shortlived. I feel it is a great lesson to understand what culture-unfriendly intervention is like.

Mahatma Gandhi and the heart and soul of systematic innovation