A sketch of Spinoza, the secular saint from “The courtier and the heretic” by Matthew Stewart

I have a fascination for secular saints, spiritual teachers who stand outside the religious boundaries and practice what they preach. Seventeenth-century Dutch philosopher Baruch de Spinoza is one of them. I got a chance to read Matthew Stewart’s book, “The courtier and the heretic: Leibniz, Spinoza and the fate of God in the modern world”. As the name suggests the book is as much about Leibniz, the German polymath as it is about Spinoza and their interaction. However, in this article, I would like to restrict myself to the brief sketch of life, times and work of Spinoza that I could create from this book.

Life: Born in a Jewish family emigrated from Portugal, Spinoza lived in the Netherlands from 1632 to 1677. He lived a life of double exile – his family was exiled from their native country and then he was excommunicated from the Jewish community because of his heretical views when he was twenty-three. After the death of his father and elder brothers, Spinoza and his younger brother managed the trading business for a few years before getting excommunicated.

During the day, Spinoza ground lenses for microscopes and telescopes. And at night, he polished his system of metaphysics. He lived a peaceful and solitary life of contemplation. However, he always had a few friends with whom he discussed his views and corresponded extensively with philosophers, scientists, and theologians across Europe. When he died, the inventory he left behind included two pairs of pants, seven shirts, and five handkerchiefs. His only luxury was a large bed with red curtains which he had inherited from parents.

Times: Spinoza grew up in Amsterdam during the Dutch golden age – times when Amsterdam was the center of world trade, tolerant of the incoming settlers and visiting traders, and most important it was a place where freedom of its citizens was valued. It was home to philosophers (Descartes), scientists (Huygens, Leeuwenhoek), painters, merchants and more. It was also a time when a new scientific order was beginning to rise on the backdrop of an established theocratic order.

Work: Key philosophical contributions of Spinoza are presented in two books: Theological-Political Treatise (1670) and Ethics (published posthumously in 1677). Here are a few sentences from the “The courtier and the heretic” that I found useful in understanding Spinoza’s ideas:

In short, I found the book quite helpful in understanding the life, times and philosophy of Spinoza. As a freelancer, a spiritual teacher, someone who enjoys solitude, frugal living and feels no sense of belonging to any religion, it isn’t surprising that I resonate with Spinoza.
Posted by Vinay Dabholkar at 7:10 AM 3 comments:

3 types of reflections and 3 leading questions 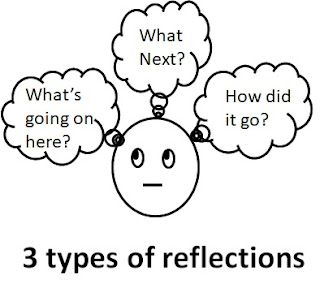 “Hi, How are you?” This common greeting is potentially an invitation to reflect. However, we mostly respond with a mechanical “I am fine, thank you” and move on. What would it mean to actually reflect? This is what we explore in this article. Let’s look at 3 leading questions that result in 3 types of reflections.

How did it go? This is perhaps the most common type of reflection. It is like rewind and replay of a chain of events with a critical lens. The time span could be past few days, weeks, months or years of our life.  Or it could be a start to the end of a project we just completed. The primary objective of this reflection is to learn from the past and incorporate the learning in future actions. Three common sub-questions during this reflection are: What went well? What went wrong? And how do we do it better? In my case, I write a note after every workshop where these points are captured.

What next? When we ask, “How to do it better?” we assume, we will continue to do the same or similar thing in future, hopefully, more effectively. “What next?” question suggests that you don’t have to do the same thing as you did in the past. If you have been working in a particular area, “What next?” may prompt you to consider doing something else. In contrast, for someone who is not working, “What next?” may prompt him to consider working. It may involve looking within and asking, “What do I really enjoy?” and then checking how more of it can be done. It may also come from feedback from the environment where a good opportunity is spotted. In my case, I tend to do this reflection every few months. Sometimes there is a course-correction, sometimes not.

What’s going on here? The previous two types of reflections involve looking at the past and into the future. The third type of reflection involves paying attention to what’s going on in the present moment. In that sense, it is a run-time reflection. Present moment may be pleasurable or painful or perhaps neither. The idea is to watch whatever sensation arises and passes. Perhaps there is a story running in the head of how I or someone else did something and that caused something else etc. The reflection involves watching the train of thought. If there is alertness one may even witness hurts and pride getting registered in memory. For me, this is going on almost all the time. It is intensified when the situation is challenging.