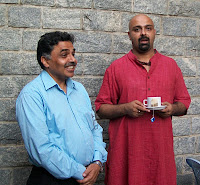 How did Gyanesh-Ratnesh manage to raise money? How does HPS business model work? How did they do the pricing? You can find the full story here.
In photo: Prof. Abhoy Ojha of IIMB (left) along with Gyanesh Pandey.
Posted by Vinay Dabholkar at 10:32 PM 3 comments: 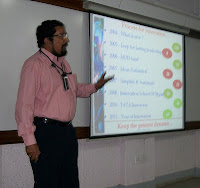 Posted by Vinay Dabholkar at 9:22 AM 9 comments:

Beyond jugaad: A summary of current practices and participant takeaways in managing innovation

Three of us (Prof. Rishikesha T. Krishnan, Prof. S. Rajeev and I) facilitated a three day Executive Development Program at IIM Bangalore last month titled “Going beyond jugaad: Building a systematic innovation capability”. 22 executives from 12 organizations participated in the workshop. On the third & last day, one representative from each organization presented their current practices for managing innovation as well as areas they would like to improve upon based on the learning at the program. Here is an attempt to summarize their perspective (not meant to be exhaustive and limited by what I captured in my notes). 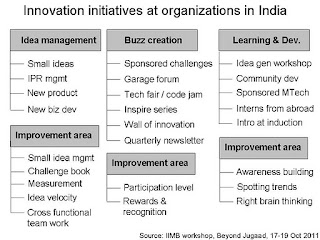 1. Idea management: Almost all the participating organizations had a system in place for managing ideas. What varied was the scope of the innovation. In some organizations there was a bias for the IP (patent) management. In some cases the global process for big ideas was very active. However, the contribution from center was low. In some places the system was active only in some part of the organization and in a few places the existing approach was primarily top-down.

2. Buzz creation: Many organizations had events such as sponsored challenge or bright idea campaign to generate ideas and buzz around innovation. In some cases these events generated several hundred ideas every year. Garage forums encourage prototyping, Tech fair creates a platform for technical paper presentation, Inspire series invites external speakers, Wall of innovation displays innovators, Quarterly newsletter raises awareness on innovations inside and outside the organization.

12 organizations is a small sample. However, we hope that the seriousness demonstrated by the executives spreads in their organizations and beyond. Let’s build a culture of innovation systematically!
Posted by Vinay Dabholkar at 10:34 AM No comments: