4 staminas of an innovator

Each of us has unique staminas – some of them come more naturally and some are built with rigorous practice. Examples are: running, weight lifting, reading etc. Some people can spend an entire day on WhatsApp without getting bored. I carry a view that innovativeness can also be built as stamina.  In an earlier article I wrote about “How to build curiosity stamina?” In this article I want to present the four staminas that I consider crucial for innovators: curiosity, experimentation, communication and collaboration.

Curiosity stamina: Being curious is easy, staying curious is not. Ask yourself this question “How long do you stay curious around one challenge area?” By now I have asked this question to several participants in my workshops. Most of them say, “Not more than a couple of days”.  That’s almost like being a couch potato or may be walking to your car every day while what you need is a running stamina of 5K or 10K. In a hyper active world where every day begins with its own set of problems, staying curious about one challenge area is difficult. That’s where one needs some discipline, perhaps of keeping a curiosity diary so that we don’t lose track of some of the interesting questions we ask ourselves. When do I decide to act on a challenge? One criterion I use is to check if I am still curious about it after a few months. Sometimes, I experiment around a challenge on the very same day!

Experimentation stamina: “But, sir, will my idea work?” Every now and then, I meet a guy who doesn’t like to share his idea openly in the class because someone may steal it. And he meets me after the class, tells his idea and wants to know if that idea will work. I usually tell him, “I don’t know. Why don’t you prototype and test it?” “That I will do, but I want to know if you think it will work.” That’s an example of low experimentation stamina. Similarly, I also meet technology enthusiasts who are busy perfecting their technology before they are ready to show it to customers. Many people just don’t get it that it is the speed of experimentation and the number of iterations that they can do that matters most. One of the participants in my workshop wanted to check if people in Bangalore would be interested in ordering filter coffee online in their office. He put out a web-page and got 30+ responses within a few days. He delivered the coffee himself to all the initial respondents. That’s an example of a low-cost experiment. How many experiments do you carry out every month? The answer could be a good indicator of your experimentation stamina.

Communication stamina: “I am not good at selling” our 12th grader son tells us. That’s not very different from how I used to think about myself perhaps a decade ago. Having done a PhD, I have been trained to represent things abstractly. It took really long time for me to realize that abstractions are not useful when it comes to communicating your idea. One way you can measure your communication stamina is by answering the following question – How many times do you present your idea before giving up on it?  Personally, reading the book “Made to stick” by Chip & Dan Heath was a turning point as far communication stamina was concerned. It provides a simple checklist to ask you for improving the communication. Is your message concrete? Is it credible? Does it contain a curiosity flow? Are you telling an appropriate story? These questions can lead to improving the design of your presentation. It is no surprise that I find movies like “A beautiful mind”, “Twelve angry men”, “The matrix” useful in explaining my ideas.

Collaboration stamina:  I feel that this is the toughest stamina to build. Why? Because it not only involves you remaining curious about a topic but also needs at least one more person to be with you in the explorative journey. Moreover, it adds new dimensions like – who gets the credit? How do you resolve things when you don’t agree? I have been fortunate enough to be part of a collaborative effort with my friend Prof Rishikesha Krishnan which lasted four-five years and resulted in our book “8 steps to innovation”. How long has been a particular collaboration? This is a good indicator of collaboration stamina. Where do you start to build collaboration stamina? I don’t know. But perhaps a good place to start could be listening and appreciating others’ work which could be related and yet different from your work. It would helpful to have a collaborator who agrees with you on a few core assumptions (beliefs) at least as a starting point. The ultimate test of collaboration stamina is the ability to collaborate with someone who holds views exactly opposite that of yours. This is known as adversarial collaboration. Nobel Laureate Daniel Kahneman talks about his experience with adversarial collaboration here.

Well, this is my list of 4 staminas useful for an innovator. Perhaps yours may be different. Happy to hear from you. Who knows? It may lead to collaboration!
Posted by Vinay Dabholkar at 4:10 PM 4 comments:

Email ThisBlogThis!Share to TwitterShare to FacebookShare to Pinterest
Labels: 8 steps to innovation

(The translation is available here).

Spiritual teacher Jiddu Krishnamurti and Physicist David Bohm met for the first time in 1961. Since then they met several times until Krishnamurti’s death in 1986. Several of these dialogues have been published in the form of books, the most popular being “The ending of time”. One such book is “The limits of thought: discussions” which presents dialogues from 1975 to 1980. Chapter 4 of this book is titled “Thought and perception” and it presents a dialogue that occurred between the two men in Gstaad, Switzerland on July 25, 1975. In many ways it captures the essence of the human dilemma and carries the potential to push an already open door a little wider.

My father Padmakar Dabholkar has been a student of Krishnamurti’s teaching for over two decades. He began translating “Limits of thought” into Marathi as a personal introspection exercise while he was visiting us in Bangalore in May-June earlier this year. I suggested to him that we share the translation of the chapter 4 (Thought and perception) on the Internet and see if it appeals to a wider audience.

Please find the Marathi translation of the chapter here.

In case you have any feedback / comments, you can reach my father at pvdabs@gmail.com.

In case you are interested in listening to the original dialogue, you can find it on YouTube here. It is titled "What is the substance of thought?"
Posted by Vinay Dabholkar at 5:55 PM No comments:

PK and a peek into the assumptions of necessity 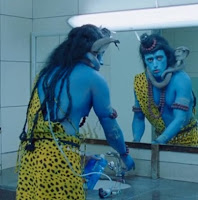 I enjoyed Amir Khan starrer PK. It depicts the struggle of an alien in trying to understand the culture in India. The film created a beautiful mirror to see how faith blinds us from seeing the reality. Whenever the topic of PK came up with my friends, it created two kinds of responses. There were some who laughed at the parody and there were others who felt that it hurt their feelings. Most of these responses were not surprising except for one category. These surprising category folks were staunch atheist and still they felt that their feelings were hurt by the movie. I began to wonder why?

Let’s visualize what a staunch atheist looks like first. He is very vocal about being atheist and at every opportunity he gets, he taunts at the so-called religious people. He says things like – “Look at these people worshipping God. They read religious scriptures, perform various rituals etc. See how ignorant they are” In fact, one of my friends keeps passing remarks on his wife who continues to perform Pooja etc. However, I was surprised to see him getting agitated about PK. Interestingly he had not seen PK and didn’t intend to see it as well. And yet, he knew that the movie is “bad”. What is going on here?

To say that this behaviour is irrational is like stating the obvious. But why does a staunch atheist get upset to see a movie making fun of the blind followers of a faith? To understand the answer, we need to understand how beliefs work. Most of our beliefs are tacit and are deeply ingrained in our memory. A belief is nothing but a set of assumptions – Hindu religion is good, if I pray to God, he will protect me etc. These assumptions are stored in the form of a set of neurological reflexes. Knee jerks automatically when tapped. Similarly, a reflex fires when it is touched by a thought or an image.

Source:
David Bohm presents “assumption of necessity” in great detail in the book “Thought as a system”, Routledge, 1994. The discussion happens while talking about the question: “Why do I get upset when someone yells at me?” (page 97-108). The discussion leads to finding an assumption of necessity, “Whenever anybody yells at me, it is absolutely necessary to feel that I’m bad.” (page 103).

Innovation - Where to begin (video)