Catalign Quarterly is an attempt to put together insights relevant for fostering a culture of innovation in organizations – both for-profit and not-for-profit. Through articles and interviews we explore principles, practices and policies that help organizations become more innovative.

The other articles are:

“4 choices in the design of an innovation campaign” – This articles summarizes the 4 choices: Open vs closed, Pure cascade vs renewal, One round vs multiple rounds, Absolute vs relative filter

“Idea selection methods: balancing efficiency vs accuracy” – This article looks at different methods like 2-1-0 method, Real-win-worth it of reviewing ideas to find a balance between speed and accuracy.

Posted by Vinay Dabholkar at 4:46 PM No comments:

3 characteristics of a good challenge statement 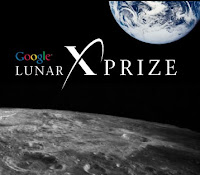 Challenge campaigns have played a crucial role in pushing the innovation boundaries. Take the case of the Google Lunar X Prize challenge announced in September 2007. The challenge calls for “privately-funded spaceflight teams to compete to successfully launch a robotic spacecraft that can land and travel across the surface of the Moon while sending back to Earth specified images and other data.” Currently the closing date for the challenge is Dec 31, 2015. India’s Team Indus is one of the 23 teams worldwide who are actively competing today for the challenge. How many teams will achieve this? We don’t know. However, what is clear is that the challenge has spurred a lot of enthusiasm, collaboration and is likely result into innovations – small & perhaps big. The question I want to explore here is: What is it about the GLXP challenge that has resulted in such excitement? Are there any inherent characteristics of the challenge statement that makes it so popular? If so, then perhaps it will be useful to any manager to create his own version of GLXP. Let’s look at 3 such characteristics: emotional appeal, concrete goal and hooks for exploration.

Emotional appeal: A good challenge statement should appeal to the emotional side. To use the Elephant-Rider metaphor, motivating Elephant is an important aspect. Reaching the Moon has always carried the fancy of mankind. Hence, GLXP carries a natural appeal. Contrast this with statement like “Improve team productivity by 20%” or “Reduce inventory by 40%”. Each of these could be an important challenge for the team. However, it is unlikely to make an emotional appeal to the team members. One way to create such an appeal is to address to a feeling people already have. For example, a challenge related to saving on paper cups in the organization may appeal to the environmentally conscious employees or a challenge related to geriatrics may appeal to the middle-aged working people whose parents are aging.

Concrete goal:  The GLXP has a well-defined goal: soft-landing on the moon, traveling 500 meters on the lunar surface and transmitting high definition images and video back to earth. Contrast this with the goal “Become a center of excellence”. It may appeal to the emotional side but gives no concrete image of what this means. In contrast, “reduce inventory by 40%” is concrete. A concrete goal helps in assessing whether the goal is met or not.

Hooks for exploration: A concrete challenge is good but not good enough especially for tough challenges. It should give some hints as to where to begin. In the words of Prof. Richard Rumelt of UCLA – it brings out a domain of action. In case of GLXP, it is believed that the toughest part of the challenge is soft-landing on lunar surface. Slowing down an accelerating spacecraft in a controlled fashion involves complex engineering.

In 1920, Thomas Edison contemplated exploring the field of Atomic energy. However, he abandoned it eventually by noting, “There is nothing to hang the imagination on”. Neither “Become a center of excellence” nor “Improve sales by 30%” provide any hooks for exploration.

In short, a good challenge statement should have an emotional appeal, a concrete goal and one or more hooks for exploration.

Thomas Edison’s comment is from “Edison on innovation” by Alan Axelrod, Jossey-Bass, page 17.

Image source: http://www.googlelunarxprize.org/
Posted by Vinay Dabholkar at 10:52 AM 3 comments: 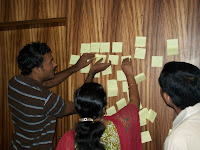 A couple of weeks back I witnessed the fastest idea review session in my consulting career. In less than an hour 50+ ideas were reviewed and put into four categories: (1) needs more study (2) go for pilot (3) implement and (4) dropped for now. That meant each idea got roughly a minute’s attention from the reviewers. Isn’t that too short? How accurate can such a review be? Well, that depends upon whether accuracy was the main criteria in the review. This being the first round of idea review, efficiency was given a priority over accuracy. In this article let’s look at different ways of doing reviews that are either efficient or accurate.

Review by walk-around & sticker-voting: How did the speedy review mentioned above take place? 50 sheets with one idea per sheet were spread on a long oval boardroom table. 3 CXOs – CEO, CFO & CTO – walked around the table reading the ideas. They were given coloured sticky dots – one colour indicating each type of decision mentioned above (e.g. go for pilot). Idea authors were present in the room while this was going on. If any of the reviewers wanted to ask a question to the idea author, the discussion happened right there and a decision was taken. Finally, for each idea that was going for pilot or implementation, a champion was identified. Imagine if each of the 50 ideas were given 10 minutes for presentation. It would have easily taken a whole day.

2-1-0 method of review: Terwiesch and Ulrich present a variant of the above approach in their book “Innovation Tournaments” called 2-1-0 review. Two minutes per presentation, one slide or poster per idea and zero questions. Reviewers vote and select the best ideas. With 2-1-0 method you can review 50 ideas in a couple of hours.

With the advent of social networking / collaboration tools, it is easier to do reviews online. For example, the Starbucks idea site shows how each idea gets comments from various other people.

Now, let’s look at a few methods of reviewing ideas where accuracy is more important than efficiency.

Science fair-style review: A couple of months back I got an opportunity to be a review panellist in Titan’s Innovation Bazaar. This was an annual event where 75 project teams were given a booth each to present their idea. Team in each booth had put up prototypes, posters, videos to explain the idea and its benefits. I along with a colleague was responsible for reviewing 25 of these 75 ideas. We had a criteria consisting of 10 parameters on which each innovation project was to be assessed. It took all of us an entire day to assess and shortlist the top ideas. The accuracy of this review is higher than the walk-around-sticker-voting review. However, it takes that much more time.

Real-win-worth it: Another criterion of idea review which I like is called “Real-Win-Worth it”. The name of the criteria tells us what it is about and that makes it easy to remember. See the picture below. Another thing I like about this criterion is that it can be applied progressively through the life of the idea. For example, in the early phase, we can just focus on the “Real” part. Some prototypes and customer feedback would give us some idea on this. Once we are convinced of that, we can focus on “Win” part etc.

To summarize, before planning for an idea / innovation review, we need to decide whether the focus is primarily efficiency or accuracy. There are multiple options available to fulfil either of these needs.
Posted by Vinay Dabholkar at 3:19 PM No comments: