No man can walk out on his own story 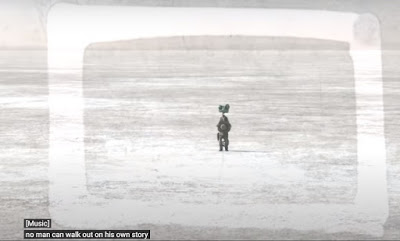 I watched this scene from one of my favorite animation films “Rango” perhaps for the 15th time (see the video clip below). The scene ends with Rango getting a piece of advice from the Spirit of the West – No man can walk out on his own story. What does it mean? Here is an attempt.


Rango, the protagonist, is a lonely lizard. He knows how to cook stories about his past adventures to impress people around him. Rango accidentally kills a hawk, becomes a hero, and eventually the sheriff. But deep down he knows that he was really scared during those heroic stunts and luck played a huge role in his survival. But the act of self-deception keeps the game going. Until one day, Rattlesnake Jake exposes Rango’s phony nature in front of everybody in the village. And Rango is asked to leave.

“I am nobody”, Rango admits to himself for the first time in his life. And finally arrives at a place where he meets the Spirit of the West. Here is the dialogue between the two in the scene:

Rango: I am a fraud, I am a phony. My friends believed in me. But they need some kind of a hero.

Spirit: Then be a hero.

Rango: Oh, no, no. You don’t understand. I am not even supposed to be here.

Spirit: That’s right. You came a long way to find something that isn’t out here. Don’t you see? It’s not about you, it’s about them.

Rango: But I can’t go back.

Spirit: Don’t know that you got a choice, son. No man can walk out on his own story.

Walking out on one’s own story is so tempting. Walking out of relationship, out of a job, leaving everything and going to Himalayas. Isn’t that a good recipe for a bestseller? But, what about the story? I am a hero, a phony, a consultant, an author, a mindfulness guru? How do you walk out of your story?

I like what Nisargadatta Maharaj told a visitor – “The dream is not your problem. Your problem is that you like one part of the dream and not another. Love all, or none of it, and stop complaining. When you have seen the dream as a dream, you have done all that needs to be done.”

Nisargadatta Maharaj quote is from Advaita classic “I am that” chapter 29 titled “Living is life’s only purpose”, page 117 of third printing.
Related blog: Rango's "Who am I?" journey from "I could be anyone" to "I am nobody", March 11, 2018
Posted by Vinay Dabholkar at 5:01 PM