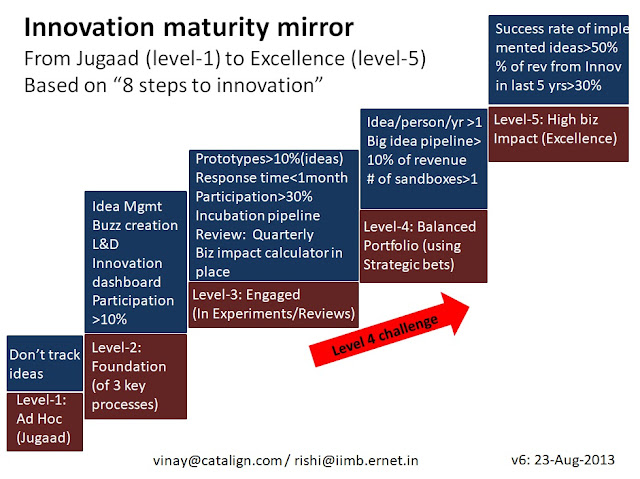 My co-author Prof Rishikesha Krishnan and I have been presenting the innovation maturity mirror (see the picture above) to executives for close to 8 years. We feel many organizations that begin their innovation journey reach level 3 and then struggle during the next leg – to reach level 4. In this article, I would like to first spell out what the level 4 challenge looks like through the innovation maturity mirror. And then propose a hypothesis that hesitation to build a sandbox in a strategic opportunity area could be at the heart of the challenge.

What’s the main difference between level 3 and level 4? Level 3 indicates that the organization is engaged in experiments and reviews. 1 in 10 ideas get prototyped, incubation pipeline gets reviewed quarterly and 1 in 3 employees participate in innovation activities. That is, if you walk around the corridors or shop floor, innovation is palpable. Level 4 indicates that, in addition to the above things, the organization now has a balanced portfolio of small, medium, and large impact ideas. On average, the organization generates 1 idea per employee per year, and projected impact of the big idea pipeline is greater than 10% of the revenue and there is at least one operational innovation sandbox.

The run rate of 1 idea per employee per person is not easy to sustain. However, with the momentum of the experimentation and challenge campaigns, it is achievable. It is also not difficult to generate big impact ideas. Ask this question in a leadership meeting and you could get a few ideas. Your favorite search engine could also help you get a few. Things get tricky when the rubber meets the road for the big ideas – a champion, typically a CXO, taking a strategic bet, allocating resources, building experimentation infrastructure, put a dedicated team around a focus area. Sandbox hesitancy hypothesis says that organizations either hesitate to set up a sandbox or don’t give enough attention to it.

Organizations tend to be secretive about their sandbox setup and that is understandable. Amazon was secretive about the Kindle effort and Apple was secretive about iPhone. But many times organizations end up acquiring new resources – people/technology to build the sandbox. For example, in 2007 Google acqui-hired a team for starting its self-driving car sandbox which eventually became Waymo. The VueTool team was working on a digital mapping project and some of its members had won 2005 DARPA Grand Challenge related to robotic self-driving cars. Mahindra acquired Reva to strengthen the electric automobiles sandbox and Flipkart acquired an AR/VR company Scapic last November. In all these cases, in all likelihood, there was a champion at the top level (Bezos for Kindle, Sergey Brin for self-driving car, etc.)

Is innovation sandbox applicable only for large companies? I don’t think so. I feel that even an SME would need to build a sandbox with all its characteristics – a champion, focussed challenge area, experimentation infrastructure, dedicated team, and failure protection.

If the sandbox hesitancy hypothesis has any merit, then a number of questions can be asked. Why do organizations hesitate to build an innovation sandbox? Is it a lack of ideas? Or lack of confidence? Or lack of clarity on the strategic bet? Or lack of resources? Or lack of urgency? Or lack of sandbox management experience?

I and Rishi hope to explore these questions in the coming months. If you feel you have some useful input, please let us know.
Posted by Vinay Dabholkar at 10:43 AM

Email ThisBlogThis!Share to TwitterShare to FacebookShare to Pinterest
Labels: 8 steps to innovation