Mindfulness involves an investigation into self-deception. Hence, learning to recognize self-deception is crucial while experimenting with mindfulness. In this article, we explore the process of self-deception using the short film (20 minutes) available on YouTube titled “Nayantara’s necklace” (2014) directed by Jaydeep Sarkar and co-written by Aparnaa Chaturvedi and Ankur Khanna. It features brilliant performances by Konkona Sen Sharma and Tilottama Shome. Spoiler alert: The article reveals the plot of the film.

Let’s begin by looking at a bit simplistic three-stage cyclic model of self-deception. The three stages are (1) Feeling “I am imperfect”. (2) Identification of the object causing imperfection and; (3) Striving to acquire the object. At the heart of this cyclic process is an image of the self (self-image), which is getting updated all the time. Let’s see how this works through a few scenes in “Nayantara’s Necklace”. 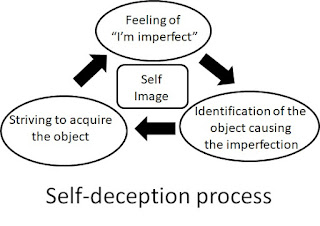 The film presents the anxieties and aspirations of two friends living in the same apartment complex – Nayantara, who is more stylish, has just returned to India from Dubai and Alka who hasn’t been outside the country, hasn’t visited a five-star hotel etc. 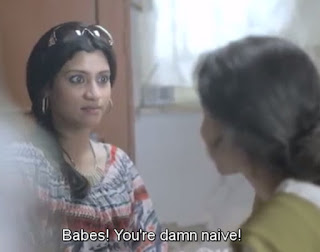 During a conversation, Nayantara tells Alka, “Babes, you’re damn naïve!” which is perhaps not new to Alka. She believes that she is not smart and stylish like Nayantara. In all likelihood, such a remark shrinks Alka’s self-image and makes her feel “small”. In fact, Nayantara doesn’t have to say it explicitly. All she needs to do is to flaunt her style and say, “It is natural”. That’s enough.

If we look at Nayantara as a metaphor for society, then we hear such remarks all the time from our family members, friends, teacher, boss, colleagues, etc. “You are stupid”, “You don’t even know this?”, “You are a below average performer” etc. The net effect is a feeling “I am imperfect” and it hurts. The hurt is real i.e. we feel pain similar to how we would feel during a headache.

2. Identification of the object causing imperfection: 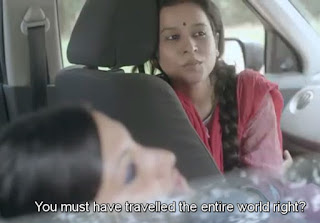 When Alka asks, “You must have travelled the entire world, right?” Nayantara answers, “Usually two-three trips abroad happen every year”. Through this Alka identifies an object that is the cause of imperfection – lack of trips abroad.

An object causing imperfection could be skin colour, weight, social status, position in the company, salary, car model, size of the house, strained relationship, net worth, etc. I guess you get the point. For a scientist, it could be peer recognition and for a spiritual seeker, a scripture such as Bhagavad Gita could say – To be perfect, you have to get rid of ALL desires (verse 2.55) or acquire a state of no-desire.  In short, everyone can find some object as a cause of imperfection.

3. Striving to acquire the object: 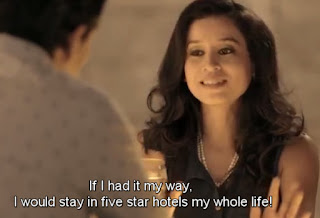 Once an object is identified as necessary to become perfect, one automatically strives to acquire the object. For Alka, the efforts begin by acquiring the looks and manners required to dine at a five-star hotel. During a dinner with her school friend, she begins to project an image of perfect Alka, the one who spends her life in five-star hotels and travels abroad two-three times a year just like Nayantara.

Where is self-deception in this? One, the conclusion that “I am imperfect” is premature. And two, the cause of the hurt is questionable. The deception lies in perpetuating a story of an "imperfect me", misattributing the cause to an external object and then justifying the striving for a "perfect me".

Here is an alternate hypothesis. The hurt is real. However, the hurt is caused because there is an assumption of absolute necessity neurophysiologically embedded in the brain that says, “It is absolutely necessary to be perfect”. Hence, whenever I hear or imagine anything that damages my perfect image, it hurts. The neural reflexes fire automatically. I misattribute the pain to an object outside.  The real cause is the absoluteness of necessity embedded in my memory.

What’s wrong with dressing well, five-star dining, trips abroad? Nothing. Question is: Is it absolutely necessary? That’s the question. If one can afford it or if the job demands it, why not? And even if one can't afford it now, one can work towards it. However, when we assume that these things are absolutely necessary no matter what the context is, then it may involve deception. That’s the suggestion.

Unless the absoluteness of these necessities is seen to be meaningless, the feeling of imperfectness will continue to hurt us. And the cyclic process continues. In part-2 we will see how life offers opportunities to learn about the nature of self-deception and how learning might take place.

Posted by Vinay Dabholkar at 5:00 PM