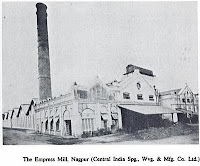 In R M Lala’s words Jamsetji Tata “launched his real career as a textile magnate” at the age of thirty five when he established Empress Mills in 1874. By then, he had visited , helped his father start a trading firm in Hong Kong, spent four years in keenly observing the textile industry and spent many Sundays at Dadabhai Nauroji’s house in absorbing stimulating discussions on political reforms in India with stalwarts such as Badruddin Tyabji (the first Indian barrister in ). What kinds of innovations did Jamsetji catalyze in Empress Mill? Let’s explore in this article.

In 1870s and Ahmedabad were the Lancshires of India. Jamsetji, perhaps at his dad’s suggestion, set out to put up his mill where the cotton came from. After getting his proposal for a land in turned down, Jamsetji went to where he found a suitable land. Jamsetji hired two assistants: One, Bezonji Mehta, an uneducated self-made man who had learnt the art of managing in the railways. The other was an English technical expert James Brooksby (CTO?). Initially all the machinist and foremen were from . Jamsetji ascribed the success of Empress Mill to these two men and tended to underplay his own role.

In 1883 Brooksby, while on home leave, came across ring spindles invented in . Jamsetji bought two ring spindle frames and set his team with Brooksby to work them as an experiment. The stated speed of 6000 revolutions was soon exceeded and ring frame produced 9000 to 12000 revolutions. Ring spinning was yet to catch on in . In fact, Jamsetji’s supplier Platts, who were at that time world’s largest supplier of textile mill equipment, refused to produce ring spindles and stuck to older technology – mule spinning. Jamsetji changed the supplier to Brooks and Doxey and replaced mule spindles with ring spindles. To perfect the technology, every defect was reported to the supplier. By the time Platts adopted the new technology, rivals had caught on.

Innovations at Empress Mill weren’t restricted to technology adoption. In fact, lack of skilled and semi-skilled labor was perhaps a bigger challenge. Workers would be absent for sixty days a year due to festivals and for several days during harvest times. Absenteeism was 10 to 20 percent a day. Jamsetji & team set about to make workers’ life easier. A Provident Fund Scheme was introduced in 1886 and pension fund was introduced in 1887. Accident compensation scheme was introduced in 1895. Most of these came before Factory Act of England making certain measures compulsory. Empress held an annual prize day were workers turned up in colorful holiday attire for performance recognition. As many as 1000 workers were called to the platform to collect prizes of gold and silver watches and chains, armlets, medals and bundles of cloth.

In Jamsetji’s words at the opening of the extension of Empress Mills in 1895, “We do not claim to be more unselfish, more generous, or more philanthropic than other people. But, we think, we started on sound and straightforward business principles, considering the interests of our shareholders our own, and the health and welfare of our employees the sure foundation of our prosperity”.

Source: For the love of India: The life and times of Jamsetji Tata, by R. M. Lala.
Related article: Jamsetji Tata's vision of "University of Science" and Prof. Ramsay's experiment
Posted by Vinay Dabholkar at 4:48 PM