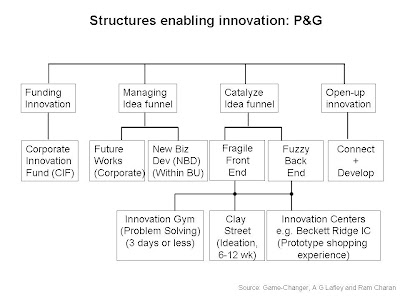 It is believed that “freedom in creativity” can have good one night stands with “structures and systems” but not a sustainable marriage. Is this really true? When innovation-guru A G Lafley was asked about structures enabling innovation, he said – I believe in the amoeba as the best model for organization and what I love about amoeba is that they continuously change their shape to eat and survive. Well, AG didn’t exactly succeed in creating amoeba structure at P&G. But I think he came pretty close and more importantly the structures did help P&G become more innovative. Let’s take a look at the structures enabling innovation at P&G in brief.

1. Structures funding innovation: Like most large organizations, P&G has a corporate venture fund called Corporate Innovation Fund (CIF). CIF specializes in high-risk/high-reward ideas. It is led by CTO and supported by the CEO and CFO. It’s primary objective is to provide the “seed money” to either create totally new businesses and/or create major disruptive innovations. CIF budget is separate from Business Unit budget. But CIF funds projects lead by innovation teams that reside in different organizations throughout P&G. Swiffer and Crest Whitestrips are examples of products that came from CIF funding.

2. Structures managing idea funnel: P&G has two structures that manage idea funnels: one outside of business units and the other within each BU. FutureWorks consists of multidisciplinary team, led by a general manager. Its primary objective is to seek out innovation opportunities that create new consumption eventually resulting in new sales and profits. They are primarily funded by CIF. Although FutureWorks reside outside BU, its innovation efforts are not off in “never-never land”. A BU “sponsor” is identified early on for each FutureWorks project to provide pragmatic business input up front and, more importantly, take responsibility for the commercialization phase in case the project qualifies for it.

New Business Development (NBD) resides within each BU. It focuses on creating disruptive and incremental innovation for a specific category, like laundry, home, or skin care. Innovation led by NBD are usually based entirely on ideas, products and technologies that are developed inside the business, for example, Downy Single Rinse fabric enhancer.

3. Structures catalyzing idea funnel: Hot zones get the innovation structure closer to amoeba. Their purpose is to identify, develop ideas and test ideas especially through the eyes of the consumer. P&G has created innovation centers around the world – in , , , and – that are designed to represent real-world home and shopping environments. “” is a combination of think tank and playground. There are desks and whiteboards, computers and conference areas. And there are also crayons, toys and chalkboard walls and storytelling is common. Cross-functional teams spend 3 to 6 weeks solving a critical business problem or addressing a deep consumer insight and creating a breakthrough product or packaging.

4. Structures that open-up the idea funnel: Connect + Develop works with a global innovation network that contributes to idea funnel in all stages. It creates a permeable wall between P&G and outside world. It nurtures partnerships with customers, suppliers, technology entrepreneurs and even competitors and leverages them to create and capture new value. More about this in: Open innovation insights from P&G Connect + Develop.
Posted by Vinay Dabholkar at 1:39 PM