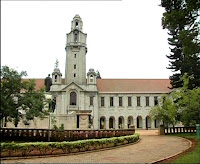 Some people carry a vision so powerful that even after they are dead and gone, the momentum of the idea carries itself forward. Jamsetji Tata was one such visionary and his idea of “university of science” was one such vision. It was presented to the new viceroy Lord Curzon in 1898, the day after his arrival in . Curzon expressed two major doubts: First, are there qualified Indians who would come for such advanced scientific training? Second, are there any employment opportunities for scientists in ? Both were valid questions. How did Curzon get these clarified? Before finding the answer, let’s look at Jamsetji Tata’s idea in brief.

In September 1898, Jamsetji announced an offer that astonished men of his day. He decided to set aside fourteen of his buildings and four land properties in for an endowment to establish a university of science. His donation was worth Rs.30 Lakh (equivalent of Rs. 10 Crore of today). It was half his wealth. The other half he left to his two sons.

What was Jamsetji’s vision? He felt – what advances a nation or a community is not so much to prop up its weakest and most helpless members as to lift up the best and most gifted so as to make them the greatest service to the country. According to the original plan – the university was destined to promote original investigations in all branches of learning and to utilize them for the benefit for . This included – scientific and technological education; medical and sanitary education, including research in bacteriology; studies in philosophy and education (including method of education), ethics and psychology; Indian history and archeology, statistics and economics and comparative philology.

How difficult would it have been for the new CEO to summarily reject the seemingly wild idea? However, an experiment was conducted to validate the doubts raised by Curzon. Secretary of state for requested the Royal Society of England to send out an eminent scientist. Royal Society selected Prof. William Ramsay, the discoverer of rare gases like Helium and Neon (who was to get Nobel later). Prof. Ramsay was also to recommend a suitable place for such an institute. Ramsay did a quick tour of in ten weeks. On Curzon’s first doubt whether the qualified students would come to the institute, Ramsay recommended liberal scholarships. On Curzon’s second doubt Ramsay indicated certain industries that could be developed in . The Kolar Gold Fields and other mineral deposits favored . In addition an imaginative dewan of , Sir K. Seshadri Iyer persuaded the Maharajah of Mysore to offer 372 acres of land. That finalized the place: Bangalore.

Later Curzon appointed a committee to draw up a “less ambitious plan” susceptible to expansion according to circumstances. He asked the committee to submit a scheme whose annual expenditure will be limited to £10,000; £2000 of which will be provided by Govt. of India for 10 years. Jamsetji’s endowment alone provided £8000 a year. Jamsetji died in 1904. Finally, in 1905, Lord Curzon gave the green light to Dorab Tata by agreeing that government would meet half the cost. Indian Institute of Science (IISc) was born in 1909 and was operational in 1911 with three departments – General and Applied Chemistry, Electro-technology Chemistry and Organic Chemistry. The first Director M. W. Travers was a student of William Ramsay.

Jamsetji was an amazing visionary. At the same time, I also appreciate Lord Curzon for being open to validating his doubts and Prof. Ramsay for carrying out a truthful experiment.