Patents from India: Broad trends over the past 35 years 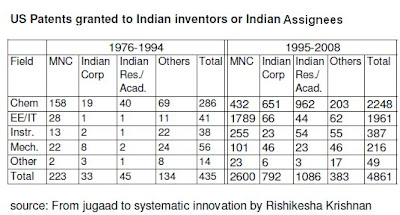 At an organization level “Number of patents filed” isn’t a perfect metric for its innovation stamina (see patent paradox and how George Eastman of Kodak resolved it). However, “number of patents” is considered a good proxy for the innovation capacity at a national level. World Intellectual Property Organization (WIPO) data reveals that during 2009 filed 761 patents as compared to (7,946), US (45,790), (29,827), (16,736) and (8,006). One way to cheer up is to look who is behind. After , we have (594), (480), (389) etc. IIMB Professor Rishikesha T. Krishnan has done a good job in analyzing ’s patent performance over the past 35 years in his new book: From jugaad to systematic innovation. Let’s look at the broad trends presented in the book.

· Indian research and academic institutions accounted for a little over 10% in the earlier period, but for as much as 22% in the later period. The Council for Scientific and Industrial Research (CSIR) is the top holder of US patents from with about 990 patents granted between 1995 and 2008. The Indian company with the maximum number of patents has only one-tenth as many as CSIR. CSIR has received more patents than all the top 20 Indian corporate patenters together.

Posted by Vinay Dabholkar at 10:01 AM