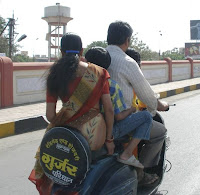 1. Feel the pain: This sight is familiar to anyone who lives in India or for that matter any part of this continent (Pakistan, Bangladesh, Srilanka). However, one day a fellow named Ratan Tata feels the pain of the vehicle owner and decides to do something about it. He has said:
I observed families riding on two-wheelers — the father driving the scooter, his young kid standing in front of him, his wife seated behind him holding a little baby. It led me to wonder whether one could conceive of a safe, affordable, all-weather form of transport for such a family

Eventually, Tata Nano is born. If we use I-squared-P definition, Tata Nano is not an innovation as yet. However, this story tells us the power of, what I consider, the biggest source of innovation: ability to feel the pain deeply within. It is certainly not a sufficient condition. Everybody who has felt the pain of the scooter owner does not get an insight. However, without the pain, there is no possibility of even thinking of the idea.

2. See the wave: In 1979, when Xerox PARC scientist Larry Tessler showed their lab to a 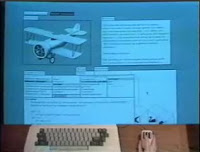 bunch of hackers, he thought, “They wouldn’t understand what we were doing, just see pretty things dancing on the screen” (source: iCon). What the hackers thought was a different thing altogether. Hacker team leader was Steve Jobs who says in his interview:

I was so blinded by the first thing that they showed me which was the graphical user interface (GUI). I thought it was the best thing I ever saw in my life. Remember, what we saw was incomplete. They had done a bunch of things wrong. But it had the germ of the idea and they had done it very well. And within ten minutes, it was obvious to me that all computers will work like this.

Steve saw within ten minutes as "obvious" is what I call: Seeing the wave. It needs deep understanding of the market and technology trends. Steve didn’t have the same confidence when he and Steve Wozniak set out to build Apple I.

3. See the waste: When you start “Please consider the environment before printing this mail” campaign, you are responding to the waste you have seen near the printer. It is no surprise that “muda” which means waste in Japanese is considered a core element of lean process mastered by Toyota.
Posted by Vinay Dabholkar at 8:51 PM