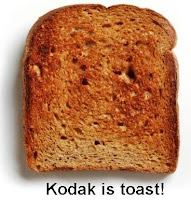 This week Moody’s Investor Service has put Kodak in its “Bottom Rung” list of probable defaulters. I wonder if anyone is surprised. We have seen so many large firms bite the dust in the last six months that Kodak is hardly a surprise. However, when someone said, “Kodak is toast” sitting in the last row in the Buffett Group gathering 18 years ago, it was a big deal! Buffett Group meetings were attended by Buffett’s mentor Benjamin Graham’s mentees and Buffett’s friends. In 1991, the meeting was held in Vancouver, British Columbia and attended by many veterans like IBM board members Tom Murphy and Dan Burke, Sequoia Capital founder Bill Ruane, Larry Tisch owner of Loews Corp, Kay Graham of Washington Post apart from, of course, Charlie and Warren. The person who had slipped in quietly from the back and sitting in the last row was a recently acquired friend of Warren Buffett, Bill Gates.

The topic of discussion was: Why do companies lose their competitive advantage? Most of the proposed answers, regardless of the company, revolved around arrogance, complacency and what Buffett called the “Institutional imperative” – the tendency for companies to engage in activity for its own sake and to copy their peers instead of staying ahead of them. Some companies didn’t bring in young people with fresh ideas. Sometimes managements weren’t attuned to the tectonic shifts in their industry. Nobody suggested these problems were easy to cure. After a while Buffett asked everyone to pick their favorite stock.

What about Kodak? Asked Bill Ruane. “Kodak is toast” Bill Gates said. Nobody else in the Buffett Groups knew that the Internet and digital technology would make film cameras toast. In 1991, even Kodak didn’t know it was toast.

“Bill probably thinks all the television networks are going to get killed,” said Larry Tisch, whose company, Lowes Corp., owned a stake in the CBS network. “No, it’s not that simple,” said Gates. “The way networks create and expose shows is different than camera film, and nothing is going to come in and fundamentally change that. You’ll see some falloff as people move toward variety, but the networks own the content and they can repurpose it. The networks face an interesting challenge as we move the transport of TV onto the Internet. But it’s not like photography, where you get rid of film so knowing how to make film becomes absolutely irrelevant.”

Now, everybody in the meeting wanted to talk to Gates. And incidentally, Gates was right. From January 1990 to December 2007, Kodak rose a measly 20%, barely more than 1% a year. The S&P (index) over the same period rose 315%, Berkshire Hathaway rose 1627% and Microsoft rose 6853%. (source: The Snowball by Alice Shroeder)

Posted by Vinay Dabholkar at 11:12 AM