When growth chokes your business: lessons from Subhiksha retail

Growth is sexy: Every day we are bombarded with Q-on-Q, Year-on-Year growth numbers (both positive and negative) such as revenue, profits, GDP, headcount. Is growth really that important as it is portrayed? Can you grow too fast? Let’s look at what happened to Subhiksha a discount retailer in India.
Subhiksha: Subhiksha started in 1997 as value focused retailer when organized retailing was only for the elite in India. It had 150 stores in 2006 which grew to 1,600 stores by September 2008 i.e. 10x in 2 years! Its revenue grew from Rs.330 Cr in FY06 to Rs. 833 Cr in FY07 to Rs.2,305 Cr in FY08. That means revenue grew by 7x in 2 years. Great! Retail is a growth sector in India and Subhiksha seems to be in the right place at the right time. There is only one catch. Subhiksha is has run out of oxygen (cash) and currently on ventilator support. TOI has reported it hasn’t paid salaries to its 15,000 employees for some time. With empty shelves and deserted showrooms, Subhiksha is sinking.

Cash is king: Time and again history has shown that our addiction for sales growth blinds us from seeing the draining cash. It also makes us vulnerable for a black swan like this recession. Dell faced similar growing pains in 1993 where its growth came at the expense of cash. Michael Dell says, “The company’s cash reserves were down to $20 million at one point. We could have used that up in a day or two. For a company of our size, that was ridiculous”. It is no surprise that Ram Charan identifies cash is the topmost priority (the other two being margin and velocity) in his article Basics of Moneymaking. I am glad I got my top priority right for my business in the beginning of this financial year.

Is retail inherently difficult? Warren Buffett’s partner Charlie Munger says, “Retail is a very tough business. Practically every great chain-store operation that has been around long enough eventually gets into trouble and is hard to fix.” (source: Snowball by Alice Schroeder). If you look at the picture below, you will see that in retail sector only 39% companies have a moat (sustainable competitive advantage) as compared to 58% in software sector and 83% in media. (source: Little book that builds wealth, by Pat Dorsey). Looks like some businesses make it harder for mediocre to survive. Subhiksha is perhaps just the beginning. 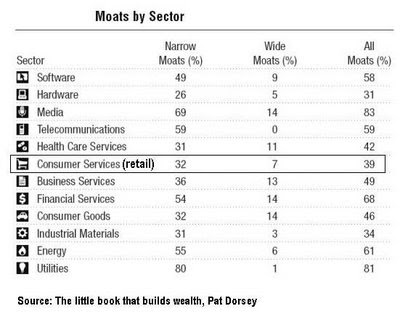 Posted by Vinay Dabholkar at 9:59 AM