Do ideas float in the air? 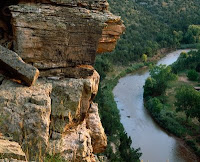 Insight at the Grand River: In 1874 Alexander Graham Bell spent the summer with his parents in Brantford, Ontario. He was twenty-seven, employed as a speech therapist in Boston and had been passionately experimenting with “harmonic telegraph” problem. One day he went for a walk on a cliff overlooking the Grand River, near his parents’ house. Far from the bustle of Boston and the pressure of competition from other eager inventors, he mulled over everything he had discovered about sound. In that moment, Bell knew the answer to the “harmonic telegraph” problem. Bell created a talking device and demonstrated it in World’s Fair in Philadelphia in June 1876. And the rest, as they say, is history. (source: In the air: Who says big ideas are rare? by Malcolm Gladwell – Tipping Point-Blink fame)
Imagining world without Bell: Now let’s ask the question: where would the world be today if Bell hadn’t gone for a walk near the Grand River? Telephone is such an integral part of one's life today that it is difficult to imagine a world without a phone. Malcolm Gladwell begs to differ. In his New Yorker article, he says: World may not have looked very different. If it weren’t Bell then it would have been Gray who would have been known as the inventor of the telephone. In fact, it was Gray who presented his idea at the Philadelphia exhibition before Bell. The two filed notice with the Patent Office in Washington D. C. on the same day, Feb 14, 1876.

What does it mean? Now, one of the three things must be true:
Simultaneous discoveries: Malcolm Gladwell subscribes to option (3). In fact, science historians have studied this phenomenon of “simultaneous discovery” (what they call “multiples”) extensively. One of the first comprehensive lists of multiples was put together by William Ogburn and Dorothy Thomas in 1922 and they found a hundred and forty-eight major scientific discoveries that fit multiple pattern. List includes calculus (Newton, Leibniz), Evolution (Darwin, Wallace), decimal fractions, Oxygen, Color photography and so on.

Ideas are in the air: Insights like the one Bell had on the banks of Grand River are accidents. However, environment is usually pregnant with the idea and metaphorically ideas are floating in the air like clouds. Those who connect with the cloud and many times multiple people do connect; end up discovering them simultaneously. So for “systematic innovation” we should be focused on creating such charged clouds and leave “connections with the cloud” to the serendipitous moments.

Posted by Vinay Dabholkar at 9:57 PM