What is an innovation? If you visit wikipedia page on innovation, you will see at least a dozen definitions. For most people that is far too many. I like working definitions which are (a) simple to understand (b) practical to use and (c) robust enough to fit multiple scenarios. In this article I would like to present two of such definitions of innovation and show how we can apply them to find out whether something is an innovation.
I-squared-P (Definition-1): For a for-profit-organization, innovation is implementation of an idea resulting in profit i.e. idea + implementation + profit hence I-squared-P. This definition is a slight variation of the definition given by A G Lafley and Ram Charan in Game-Changer.

I-squared-P (Definition-2): For a system, innovation is implementation of an idea resulting in improved performance of the system (idea + implementation + performance improvement). System here could mean a company, not-for-profit organization, a business unit, a community, a city, a nation etc. Performance could mean revenue, profit, health, GDP, harmony, literacy etc. This definition is a slight variation of definition given by Peter Drucker. 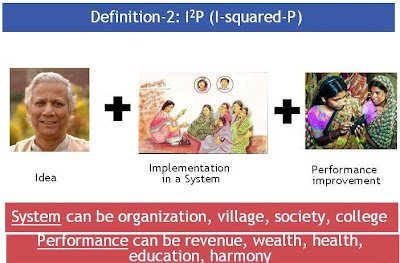 Applying the definitions:
Patent filing: John, a researcher in ABC Shoe Company, files a patent for a shoe design which charges a mobile phone battery via energy generated from walking (hypothetical). This is an idea that is can be implemented. It is not clear whether it was implemented and whether it resulted in profit. Hence, we can’t say whether it is an innovation.

Satyam scam: Accounts are manipulated for several years to show increased profits. This is an idea and it is implemented. It also resulted in increased profits in the books. So it fits the definition, at least superficially. Question is, should we consider “profits in books” or “real profits”? If we take profits to mean “real profits” then it is not an innovation.

Air Deccan: Air Deccan introduced low cost airline service in India and created a new industry. This is certainly an idea that is implemented. Did it make profit? Cumulatively, until it was sold, it had negative returns (losses) on invested capital. So it is not an innovation as per definition-1. How about applying definition-2 with Indian society as the “system”? It has certainly benefited the society by creating a low cost airline industry. Hence, Air Deccan is a social innovation (definition-2).