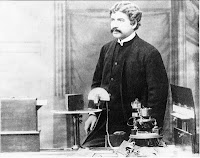 Thanks to the gift we got from Prof. Dipan Ghosh during our visit at IIT Bombay (alma mater of me & my wife) I got an opportunity to see the special issue of Physics News published in October 2009 on the 150th anniversary of Sir. J. C. Bose. It was fascinating to read about the man who, as The New History of says,” invented national science for as laboratory science.”

In 1895 JCB gave his first public demonstration in of electromagnetic waves, using them to ring a bell remotely and to explode some gunpowder. In 1896 the Daily Chronicle of England reported: “The inventor (JCB) has transmitted signals to a distance of nearly a mile and herein lies the first and obvious and exceedingly valuable application of this new theoretical marvel”. It would be two more years (1897) before the first successful demonstration of Marconi in Salsbury Plain in . JCB had used semi-conducting crystal as a detector for radio waves. Sir Neville Mott, Nobel Laureate in 1977 for his own contribution to solid-state electronics remarked that, “J.C. Bose was at least 60 years ahead of his time” and “In fact, he had anticipated the existence of P-type and N-type semiconductors.” What do I find unique in JCB story? Let me articulate 3 things:

1. Fighting spirit: When JCB returned to after completing BA from in 1885, he had a recommendation letter from Viceroy Lord Ripon. Principal of didn’t like this and JCB was given a position but at a salary one third the salary of sahib teacher. JCB continued to teach and yet didn’t accept any salary for three years until the Principal relented. JCB received all his arrear salary as a teacher in the senior grade with retrospective effect from the date of his joining the college.

2. Pursuing one’s passion: On his thirty sixth birthday in 1894, JCB took the now famous vow of devoting his life in the pursuit of scientific research. He converted a small enclosure adjoining a bathroom in the college into a laboratory. His productivity as a researcher zoomed during the following year. In May 1895 he read a paper before the Asiatic Society of Bengal; by October 1895 he was able to dispatch to the Royal Society another paper, while three short articles would appear in The Electrician in December 1895. Impressed by his work Royal Society offered him a special Parliamentary grant for his research. JCB would later say, “That day the closed gate opened and for five years this progress was uninterrupted”.

3. Role of instruments and laboratory: JCB developed extremely sophisticated instruments in his lab like resonant recorder, high magnification crescograph, photosynthetic recoder etc. The resonant recorder could automatically record velocity of excitatory impulse with an interval down to 1/1000th of a second.

Here is how JCB described his own method of research: “The first condition is imaginative faculty, for the true laboratory is one’s own mind where every experiment has first to be visualized in all details and where behind all illusions one catches glimpses of truth. Aimless experimentation without clear vision is futile… The researcher has next to compare his thoughts with facts to be discovered by following surer paths of demonstration. Unrestrained imagination inevitably leads to widest speculation which is subversive of intellectual sanity. Thus, methods of introspection and experimentation must equally balance, one supplementing the other. Two other conditions for successful prosecution of research are the facilities of a well equipped laboratory and the invention and construction of new equipments of extreme delicacy and precision.”