INSSAN 20th Annual Convention: where shop-floor innovators are the heroes 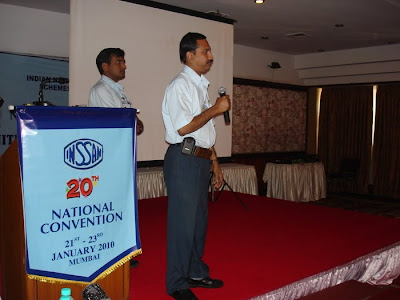 There are many forums where “man on the top” is celebrated. But not many where “man on the spot” – innovators at the shop floor carrying designations like technician, utilities operator, maintenance operator are celebrated. Indian National Suggestion Schemes’ Association’s (INSSAN) 20th Annual Convention held in Mumbai last week was one such forum. Personally it was a humbling experience for me.

In the picture is Mr. Srinivasan, a sr. assistant from Hosur plant of TVS Motors, shown presenting his idea. Srinivasan became curious when he observed that the piston pin in StarR motorcycle model costs Rs. 15.08 while it costs only Rs.13.87 for VictorGLX model. After doing a “why-why” analysis he found out that the cost was different due to the logistics overhead – pin for Star coming all the way from Andhra Pradesh (500km) while the pin from Victor coming from a nearby place (8km). After laboratory analysis he found out that the material properties of the two pins are the same. When Srinivasan was satisfied with his testing, he suggested that the piston pin coming from nearby vendor be used for StarR and it has already been implemented saving TVS

Guess how many ideas Srinivasan has suggested that have been implemented? A whopping 5792 ideas over the last 6 years saving TVS Rs. 4.86 Crores! He has won best suggestor award 6 times at TVS and also has traveled twice abroad to attend international conferences. Srinivasan was one among 60 to present his idea in the INSSAN’s Convention. The innovators had come from all corners of like , Trichy, Vizag, , Hosur, Bhilai, Gaziabad, , Ankaleshwar, Silvassa, Thal, Khopoli, Kandivli, Pune etc. Participating organizations included PSUs like BEL, BHEL, BPCL, RCF, SAIL and private companies like Coromandel, Hero Honda, IPCA Labs, Mahindra & Mahindra, Sterlite Industries, Tata Power, Tata Motors. The only high-tech company represented was Bharat Electronics. Following sectors were missing: Retail, Hospitality, Healthcare, IT, Education, Telecom.

TVS also happens to be leader in when it comes to idea per person per year metric. In 2009, on an average every TVS employee suggested 44 ideas as compared to an average of 5 ideas per year over 28 companies that participated in the survey. That is close to 10 times the average! You ask the TVS folks and they say, “We are very serious about this process and every quarter review our progress. Last year, every employee carried a goal of 36 ideas for the year”.

Suggestion schemes in are over half a century old, perhaps tracing their origin at Tata Steel, . Unfortunately, we don’t have any literature which tells us why some suggestion schemes in India have survived and thriving while others have died or undergone multiple birth-death cycles.

Kudos to INSSAN organizers for creating a platform where we celebrate “men on the spot” and appreciate their ideas!