Architect of Quality: The autobiography of Dr. Joseph Juran 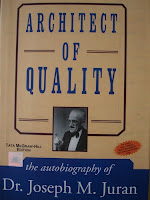 I have a deep-rooted fascination for legendary practitioners who preach what they practice and vice versa. For me to find such a person, 4 things should happen: (1) This person should have been a hard-core practitioner contributing significantly to the practice (2) He should have written about the principles, methods and tools that he practices (3) He walks the talk; and (4) I come across, comprehend and appreciate his message. While there may be many who qualify criteria (1) and (2), criteria (3) is very demanding and (4) needs a lot of luck and carries the gravity of my biases. So far I have come across following legendary practitioners: Ramana Maharshi, Warren Buffett, Mahatma Gandhi, Thomas Edison and A G Lafley. This week I discovered another in this category: Dr. Joseph Juran, the architect of quality through his autobiography.

What did I find so fascinating about this book? Let me articulate three things.

· Brutal honesty of narration: When you are a legend, it is easy to write with a tone, “What did I do right to become great?” However, it is much more difficult to look at the movie of your life dispassionately and avoid the blame-game. For example, Juran narrates a story when his career seemed to have hit a plateau at Western Electric (an AT&T company). This was the first time in his career that a vacant slot above him gets filled by someone other than Juran and it shattered his belief that promotion is an entitlement. It made Juran to go into a “revenge” mode for some time. Looking back after 60 years, Juran tries to answer: “Where did the revenge emotion come from? What did I not understand at that time?” In this process, he uses data he gathered from his bosses and subordinates much later on the perceptions people carried about him (tactless & arrogant). I found this approach of writing impressive.

· Evolution of “process capability” as an idea: One of the core contributions of Juran is the concept of “process capability”. It was a radical innovation that demonstrated that you can improve productivity systematically without adding any machinery, workers or material. It made a huge impact in Japanese industry in 50s and 60s, for American industry in 70s and 80s and to the rest of the world later. Juran traces beautifully the conception of this idea, difficulties faced in getting it adopted in his own organization, role of professional societies like Society of Advancement of Management (SAM), American Management Association (AMA), Japanese Union of Scientists and Engineers (JUSE) etc. in spreading the idea and the role of consulting projects and books Juran wrote in establishing the idea.

· A powerful lens to look at last century: Juran came from a Jewish immigrant family and lived for 104 years (1904-2008). His first ten years were spent in poverty and he lived in ’s red-light area for 4 years with his dad after his mother’s death. His first car was Ford Model-A (bought in 1929), his company’s strength came down from 40,000 to 7,000 during Great Depression (he survived the lay-offs), he was engulfed by fears of anti-Semitism during world war-II, he decided to become a freelance consultant when it wasn’t an established practice (1945), in 2001 Juran celebrated 75th wedding anniversary with his wife Sadie. Juran wrote the last chapter of this book in 2003. This vast canvas makes the book an amazing lens to look at the last century.

I recommend this book to anyone interested in any of Business history, Quality, Management, Innovation and Consulting. In it costs just Rs.359. In all likelihood, I will re-visit this book for years to come.
Posted by Vinay Dabholkar at 11:56 AM