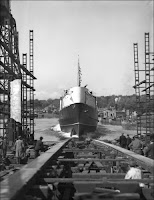 In Corporate Creativity, Alan Robinson and Sam Stern trace the history of idea management systems. About William Denny and his system, they write:

In 1864, at the age of sixteen, William Denny began a five-year apprenticeship in his father’s shipyard in . He worked in the yard for twelve hours each day and upon returning home, studied for two more. In this way, he not only learned about shipbuilding but came to know well the workforce and the working conditions in the company.

On his twenty-first birthday, Denny was made a partner in the firm, and he soon set about overhauling the shipyard’s management practices, a project that would occupy him for twelve years. The systems he devised were described in a set of rules, a copy of which was distributed to every employee in the shipyard. These comprehensive rules were divided into five categories, one of which was “Rules for the awards committee to guide them in rewarding the workmen for inventions and improvements”.

This system was started in 1880 and quickly proved to be a success. To run it, he set up a two-people awards committee consisting of a member of engineering department and one person from outside the company, who also acted as a chairman. The rules were as follows:

An employee (exclusive of head foremen, officials of Awards Committee, and heads of departments) may claim an award from the committee on the following grounds:

1. That he has either invented or introduced a new machine or hand tool into their works

2. That he has improved any existing machine or hand tool

3. That he has applied any existing machine or hand tool to a new class of work

4. That he has discovered or introduced any new method of carrying on or arranging work

5. That he has invented or introduced any appliance for the prevention of accidents

6. That he has suggested some means by which waste of material may be avoiced

7. Or generally, that he has made any change by which work is rendered either superior in quality or more economical in cost.

Cash award from £2 to £15 were paid for each accepted idea, according to the committee’s estimate of its worth. If an idea was patentable, the rules stated that the company would give the inventor £15 and pay all expenses necessary to obtain a patent in inventor’s name. Other than the stipulation that the company should have free use of the idea, the inventor was free to pursue any other opportunities that might result from his patent. In 1884, a further incentive was added: award money would be doubled for any employee submitting five or more ideas.

By 1887, more than 600 ideas had been received, 196 of which had been accepted and award monies of £933 had been paid out. The company also built world’s first commercial ship model experiment tank in 1882. Dumbarton has a museum showcasing this tank and hosting exhibitions such as “Denny: innovation and experimentation”.
Posted by Vinay Dabholkar at 10:59 AM