Thomas Edison and the patent paradox 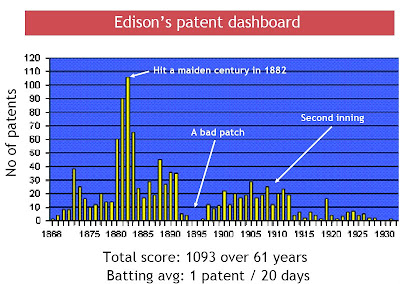 With 1093 patents to his credit has been an undisputed king of the patent world. At least a third of these patents have been related to incandescent lamps, generation and distribution of electricity. So one would expect that the electricity related patents might have been ’s greatest assets. Now, contrast this understanding with a remark from his biography Edison his life and inventions - Edison confesses that he has never made a cent out of his patents in electric light and power—in fact, that they have been an expense to him, and thus a free gift to the world. It is like Sachin Tendulkar saying all those centuries didn’t help win. Is there some kind of paradox here? After all, aren’t patents supposed to create temporary monopolies? And if you have a few hundred, shouldn’t you be in a good position to beat competition? Then why didn’t make any money in electricity business? Let’s explore the paradox which we call “patent paradox” in this article.

Now let’s start with the cynical proverb referred in ’s biography – A patent is merely a title to a lawsuit. How much money did Edison and his companies put in patent litigation? Upwards of two million dollars involving over two hundred lawsuits. That’s a lot of money, lawsuits and energy! The filament patent (part of light bulb) was the star attraction for legal battles resulting in over six thousand pages of legal record. So there was a lot of waste of paper too! The biography says - Every conceivable phase of ingenuity that could be devised by technical experts was exercised in the attempt to show that had accomplished nothing new. won but at a huge cost. wasn’t dumb. So why did he go after patents? Let’s do a quick summary on what and why of patenting from patent FAQ at World Intellectual Property Organization.

What does a patent do?

It provides an exclusive right to the inventor without whose consent the invention can’t be commercially made, used, distributed or sold.

Why are patents necessary?

Patents provide incentives to individuals by offering them recognition for their creativity and material reward for their marketable inventions. These incentives encourage innovation, which assures that the quality of human life is continuously enhanced.

Well, not really. Richard Tedlow, a business history professor at Harvard, points out three perils associated with patents in his book Giants of Enterprise. First, as we saw earlier they generate lawsuits. Second, a patent is a public document tipping off the rest of the industry to the company’s direction. Third, if a patent can be “invented around,” the information may cost the company dearly.

In technology based innovations, patents are essential. However, they are certainly not sufficient in keeping competitors at bay. As Peter Drucker pointed out a quarter of a century ago in his book Innovation and Entrepreneurship – Bright ideas are the riskiest and least successful source of innovative opportunities. The casualty rate is enormous. No more than one out of every hundred patents for an innovation earns enough to pay back development costs and patent fees. A far smaller proportion, perhaps as low as one in five hundred, makes any money above its out-of-pocket costs.

Posted by Vinay Dabholkar at 10:48 PM