Margin of Safety: My most favorite insight of 2009 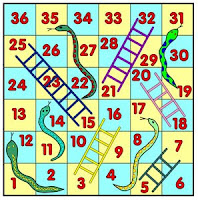 2009 was a year of severe economic depression. It is no surprise that I began to appreciate a concept called Margin of safety a lot more during 2009. What is Margin of Safety? And who was its father? Let’s explore these questions in this article.

Warren Buffett’s guru Benjamin Graham introduced the concept of “margin of safety” (MOS) in a seminal book “Security Analysis” published three quarters of a century ago (in 1934) in the middle of Great depression. (who himself was born during great depression in 1930) explains MOS as follows: Our best ideas haven’t done better than others’ best ideas, but we’ve lost less. We’ve never gone two steps forward and then one back – may be just a fraction of a step back. Well, this last line, never going two steps forward and then one back, sums up what margin of safety means.

Most of us learn about MOS (or lack of MOS) early in our childhood when we play the game of snakes-and-ladders. We know that even if you have climbed several ladders and reached the 92nd position, the snake on 94th position can bring you back all the way down to 4th position. Perhaps Tiger Woods never played snakes-and-ladders when he was a kid. Perhaps he did but he climbed so many ladders in the past two decades without hitting a snake that he forgot that he is actually playing snakes-and-ladders.

Nassim Taleb calls the snake, especially the long snakes, “Negative black swan” in his bestselling book Black Swan and we saw earlier that being aware of the possibility of snake ahead is extremely important in innovation. We saw how Thomas Edison lost a decade worth of work in no time due to hitting upon a snake.

Incidentally, Benjamin Graham, like Tiger Woods, was also popular among girls. But he was wise enough not to create a brand out of his character. You and I may not consider anything wrong with having many girlfriends. Unfortunately, you and I don’t count that much when it comes to being a brand ambassador. Society counts and more importantly media counts.

Have you climbed too many ladders in the recent past? Then you better take a stock of the snakes ahead. And best is to avoid games with potentially long snakes. As Buffett’s partner Charlie Munger says, “Tell me where I am going to die, so I don’t go there.” And what if I can’t avoid “going there” like Tiger Woods? Then use Taleb’s suggestion and – Try to reduce snake-slide through redundancy, more insurance, more cash and less leverage.