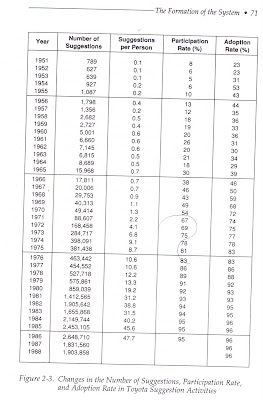 As “innovation” buzzword gains popularity, various sub-areas start getting attention too. However, many of the sub-disciplines associated with “systematic innovation” are several decades old. One such sub-discipline is “idea management system”. In fact, the book “40 years, 20 million ideas” gives an excellent overview of how an idea management system evolved from 1951 till 1988 in . The book traces the origins (in 1950s), structures, processes, challenges in adoption and psychology of change and the role senior management played in making Toyota suggestion system work. It was a surprise to me to find out that idea management system came to Toyota from Ford when Toyoda and Saito visited Ford's River Rouge plant in Detroit in 1950-51.

During its first year (1951) there were 789 suggestions and awards totaling $2638. Both the quantity and quality of the suggestions were rather low. One reason apparently was that the employees thought “creative ideas” must be something like “big inventions”. Consequently, Shoichi Saito, father of the creative idea suggestion system, started emphasizing quantity and efforts were made to increase the number of suggestions. In fact, they replaced the formal kanji characters with hiragana alphabet in the logo to soften the stiff tone of the message. It took 20 years for that number to reach 100,000 ideas a year. Idea per person per year increased from 0.1 to 2.2 during the same time.

Yasuda-san writes – One factor responsible for increasing the number of suggestions at is the element of company culture called “on-site actual checks”. This means that before judging whether a certain idea will be successful, it is first tried out. To see whether something is suitable for customer, the first thing is t check out the customer’s actual situation. Failures are treated in a positive way, with absolutely no criticism. This minimizes the chances of rejection from the selection committee and helps keep the morale up for the employees submitting the suggestions.

Another factor that helped the suggestion system was a social club called Toyota GI (Good Idea) Club formed in 1974. It began as a social club by 13 people who had received annual gold prize for excellent suggestions. It was a voluntary group that received no subsidy from the company. The GI club began as a group of friends, but through training sessions, lecture meetings and other activities, it subsequently became a place for self-study for the purpose of making higher quality suggestions in the suggestion activities. As of 1988 the group had 1000 members.

This book is currently out of print. However, I hope it becomes available to others as it is the most comprehensive documentation on any idea suggestion systems I have seen. I found it in the Indian Institute of Management library.
Posted by Vinay Dabholkar at 10:15 AM