Appreciating the promise of an underdog technology: story of Henry Ford’s first meeting with Edison 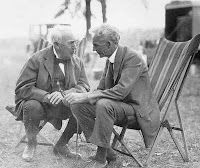 Meeting with Thomas Edison on 11th August 1896 and hearing his words of encouragement was a turning point in the life of Henry Ford, the founder of Ford Motor Company. In 1890s , pursuing electric cars, telling young Ford that gasoline cars hold more promise than electric cars was like Ken Olsen of DEC telling Steve Jobs that PCs hold more promise than mini computers in the 70s. How did manage to see beyond electricity? Let’s explore this in this article.

In 1896, Henry Ford was working as a Chief Engineer with Detroit Edison Company with a salary of $125 a month. His boss Alex Dow approved of experimentation but did not like gas experiments. Ford mentions Alex saying, “Electricity, yes, that's the coming thing. But gas--no." It was a time when – as Ford recalls - all the electrical engineers took it as an established fact that there could be nothing new and worth while that did not run by electricity! It was to be the universal power. Edison, of course, was the torch-bearer of this universal power. It is in this context that Ford met Edison when Ford and Alex went to attend annual convention of all companies at Manhattan Beach Hotel.

Even though Alex disapproved of gas experiments, he was the one to introduce Ford to . Alex told , “There's a young fellow who has made a gas car." Soon Edison and Ford got into a dialog. This is how Ford recalls the conversation:

"Is it a four-cycle engine?" he asked. I told him that it was, and he nodded approval. Then he wanted to know if I exploded the gas in the cylinder by electricity and. whether I did it by a contact or by a spark—for that was before spark plugs had been invented.

I told him that it was a make-and-break contact that was bumped apart by the piston, and I drew a diagram for him of the whole contact arrangement which I had on my first car—the one that Mr. Dow had seen. But I said that on the second car, on which I was then working, I had made what we today would call a spark plug—it was really an insulating plug with a make-and-break mechanism—using washers of mica. I drew that too.

He said that a spark would give a much surer ignition and a contact. He asked me no end of details and I sketched everything for him, for I have always found that I could convey an idea quicker by sketching than by just describing it. When I had finished, he brought his fist down on the table with a bang and said: "Young man, that's the thing; you have it. Keep at it. Electric cars must keep near to power stations. The storage battery is too heavy. Steam cars won't do either, for they have to have a boiler and fire. Your car is self-contained—carries its own power plant— no fire, no boiler, no smoke and no steam. You have the thing. Keep at it."

I find four things interesting in this story: (1) How most people get blinded by the technology-of-the-day (like Ford’s boss Alex) (2) Alex introducing Ford to Edison in spite of his grudge (3) The details into which Edison went questioning Ford (4) ’s ability to appreciate an underdog technology.

Ford quit his job on August 15, 1899, and went into the automobile business. Ford and Edison became lifelong friends.

Sources: Edison as I know him by Henry Ford and My life my work, Henry Ford’s autobiography.
Posted by Vinay Dabholkar at 2:25 PM