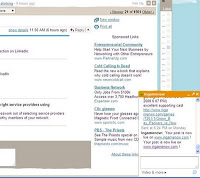 I wrote last year about how Google’s AdSense almost got killed. Paul Buchheit, who created the first AdSense prototype has written a nice article himself about how he prefers Communicating with code. If you are interested in prototyping or innovation, I say it is a must read.

This is what I found interesting in the article about AdSense innovation:

1. Idea was in the air: Paul says, “The idea of targeting keyword based ads to arbitrary content on the web had been floating around the company for a long time". It was “obvious”. And apparently, “We needed a way for Gmail to make money, and Sanjeev Singh talking about using relevant ads”. I call these “floating pregnant idea clouds”. See do ideas float in the air?

2. Idea was “obviously bad”: "Most people believed that it would require some kind of fancy artificial intelligence to understand the content well enough to target ads, and even if we had that, nobody would click on the ads." What is even more interesting is that even Paul “thought that they were probably right”.

4. First response wasn’t positive: I released the feature on our unsuspecting userbase of about 100 Googlers, and then went to sleep. The response when I returned the next day was not what I would classify as “positive”. Someone may have used the word “blasphemous”.

5. Project priority changes from lowest to high: I wasn’t the only one who found the ads surprisingly relevant. Suddenly, content targeted ads switched from being a lowest-priority (unstaffed, will not do) to being a top priority project, and an extremely talented team was formed to build the project and within may be six months a live beta was launched.

Kudos to Paul who went ahead with a fun experiment for an idea which was considered “obviously bad” and had “lowest priority”. However, what I find equally interesting is the role of environment (or culture) in the whole process. For example, step-1 tells us that there was an environment where ideas float around. Step-2 tells us about transparency in judging ideas i.e. people knew why it was considered “obviously bad”. People didn’t say “Management considers it a bad idea”. Step-3 shows us (a) anyone can work on ideas which are low priority and (b) anyone can experiment with codebase without having to take permissions and then release it for testing. I find step-5 to be one of the most important as far as innovation process is concerned because it shows the speed with which an idea with “lowest priority” was re-evaluated after the response from Paul’s prototype release and assigned “extremely talented team”.
Reminds me of Internal Innovation Bazaar of Gary Hamel.

Posted by Vinay Dabholkar at 4:48 PM