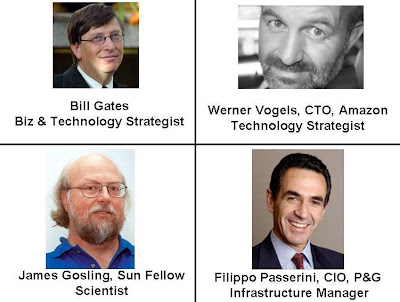 In this article we look at 4 types of functional roles technical leaders play. These are: (1) Business and technology strategist (epitomized by Bill Gates) (2) Technology strategist (Amazon’s CTO Werner Vogels) (3) Scientist (Sun Fellow and father of Java, James Gosling) and (4) Infrastructure manager (Proctor & Gamble, CIO, Filippo Passerini). We describe each of them briefly:

1. Business and technology strategist (Bill Gates): Bill Gates demonstrated an uncanny ability to device a business strategy and a technology strategy for winning the PC software game. He had deep product understanding especially the core products. And he played a crucial role in forming strategic partnerships like Intel. Bill used to take week off twice a year (called “Think Week”) and go into seclusion to ponder over Microsoft strategy, read hundred odd papers and write memos to team on strategic direction. This isn’t the most commonly found role in large organizations. Typically you will have a separate person taking care of business strategy and technology. However, it is a typical role in technology start-ups.

2. Technology strategist (Werner Vogels, CTO, Amazon): Vogels has helped Amazon grow from an online retailer (albeit one of the largest, with more than 55 million active customer accounts) into a platform on which more than 1 million active retail partners worldwide do business. Werner says, “Growth is core to Amazon.com's business strategy, and that has had a significant impact on the way we use technology. A large part of Amazon.com's technology evolution has been driven to enable this continuing growth, to be ultra-scalable while maintaining availability and performance.” For a technology strategist to succeed, he needs to partner with a business strategist. I am assuming, at Amazon, Jeff Bezos and Werner Vogels form a good partnership. Another such successful partnership that comes to mind is between Steve Jobs and Steve Wozniak of Apple during Apple-I and Apple-II days.

3. Scientist (James Gosling, VP and Sun Fellow): James did the original design of the Java programming language and implemented its original compiler and virtual machine. He has recently been a contributor to the Real-Time Specification for Java. He is currently a researcher at Sun labs where his primary interest is software development tools. While James has built a technology (Java) that has had a significant impact on the technology world, it hasn’t helped Sun create a competitive position. This is where scientist role differs from the previous two strategist roles. Both roles are essential. However, in a for-profit world, only large and profitable corporations can afford scientist roles.

4. Infrastructure manager (Filippo Passerini, CIO, Proctor & Gamble): For an FMCG company like P&G core, technology would involve areas such as chemicals, fabric, biotechnology, healthcare. However, you still need someone who enables smooth information flow within the organization and with customers and partners by making right technology choices and deploying them. For example, collaboration is Passerini’s particular passion. That's reflected in his latest project: rolling out 48 of Cisco Systems' super-high-end Telepresence teleconferencing systems over the next nine months. Passerini says this is the most aggressive use of the technology to date and serves as "an example of how to bring collaboration to the next level."

Note that these roles are applicable in a business unit context as well. See a related view on this topic: Role of the CTO – Four models of success by Tom Berray and Raj Sampath.

Posted by Vinay Dabholkar at 11:44 AM