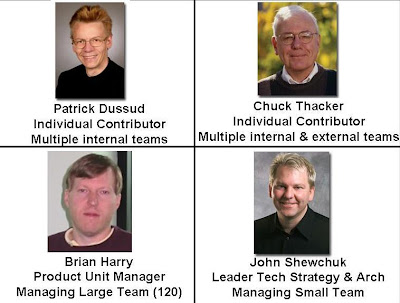 In the previous article we looked at 4 types of technical leaders from a functional or responsibility perspective. Many times I am asked whether technical leader should be an individual contributor. In fact, many organizations have “individual contributor” as an essential attribute for people on the tech-ladder. Let’s look at 4 representative technologists (Technical Fellow) from Microsoft and how their roles are structurally different. I have made some assumptions based on their profiles available at “Microsoft Big Brains”. It is possible that some of the assumptions could be incorrect. However, I have across technical leaders performing all these types of roles.


This shows that technical leaders work under different kind of structures.

Posted by Vinay Dabholkar at 3:40 PM