Neuroscience of mindfulness: My 4 takeaways from Catherine Kerr perspective 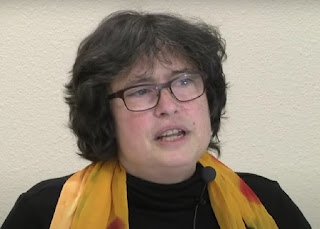 Catherine Kerr (1964-2016) was an American neuroscientist who made important contributions to the neuroscience of mindfulness. Her research was focused on the relationship between the material processes in the brain and the body awareness practices like mindfulness, tai chi and qigong. I found her work interesting because of three reasons. One, she had a cautious attitude towards the tall claims attributed to mindfulness. “Don’t believe the hype,” she said while also mentioning, “Behind the hype, there is some truth”. Two, I found her work on brain rhythms especially alpha waves and their relationship to mindfulness intriguing and relatable. And, three, she was trying to balance quantitative research from brain imaging studies with qualitative research from personal diaries and narratives. In this article, I would like to present my 4 takeaways from Cathy’s perspective. They are related to attentional freedom, brain rhythms, body-brain information loop, and existential reorientation.

When attention shifts from ruminating thoughts like “I am not good enough” to present moment sensations there is a different circuit in the brain that gets activated5. Anxious rumination activates the medial prefrontal cortex, also called the default mode network. And present moment awareness activates the lateral prefrontal cortex. Activation of these two circuits is found to be anti-correlated.

Alpha waves as volume control knobs: “How does a practice that begins by paying close attention to the toe reduce negative thoughts?” This is how Cathy introduces the research question she explored6. Her subjects, the treatment group, underwent the 8-week Mindfulness-Based Stress Reduction (MBSR) program. Her findings suggested that the thalamus and associated circuits act as a gatekeeper for various signals and alpha rhythms, brain waves of frequency around 10Hz, act as volume control knobs. For example, currently, as I am sitting in front of a laptop, there is sensory information coming in from my butt on the chair, visual input from the laptop screen, auditory input from surrounding sounds, thoughts related to this blog, etc. Alpha rhythms regulate these signals and block the signals it considers non-relevant in the current context.

When we become dis-embodied and attention is taken up mostly by thoughts, alpha rhythms become inflexible and tend to suppress bodily signals. What Cathy found out is that after 8-weeks of BMSR practice which involved paying attention to bodily sensations, alpha rhythms became more flexible in a statistically significant way. This flexibility extends to other signals as well. That is, learning to be mindful of the body teaches you to be mindful of the other sensations, thoughts and feelings7. Her research also found out that people with chronic pain have inflexible alpha rhythms and they lose access to body-space.

Her hypothesis was that when we are more embodied i.e. our awareness extends into our body, the quality of information sent back from the body to the brain is better. Apart from beta rhythms, Cathy also looked at clinical markers in fatigue called inflammatory cytokines9. For this research, Cathy decided to focus on distressed cancer survivors because many of them tend to be actively fatigued for years. They don’t have the energy to do exercise. However, they may be able to do slow body awareness exercises like tai chi and qigong. Cathy was a cancer survivor herself for two decades and a practitioner of these Chinese practices.

Cathy felt that mindfulness needs to be taken “off the cushion”10. Mindfulness is not only about doing a seated meditation. It can happen while you are moving. “Mindfulness on the go” has been an important aspect of my workshops and hence this aspect is interesting to me.

Existential reorientation: During her brain imaging research with the 8-week mindfulness program practitioners, Cathy also looked at the daily journal of some of the participants. And, she was surprised to find that most of them went through a lot of distress during weeks 4, 5 and 611. Participants experienced a feeling of insecurity. Some felt like quitting and moving to the Bahamas. Some of them felt like quitting the program. And in weeks 6, 7, and 8 participants began to settle into a positive trajectory. This led to a new hypothesis that perhaps somatic awareness in the longer-term leads to an existential reorientation i.e., re-construction of self-image12. Self-image has multiple dimensions e.g., bodily self, volitional self, narrative self, social self, etc. Self-image change includes changes to the body’s representation in the brain. She mentioned that this is just a hypothesis and yet to be tested.

From my personal experience and through the interaction with others, it is not at all uncommon to see existential reorientation. Am I an independent entity trying to be in control of the situation? Or am I deeply connected with the world with an illusion of control? Questions of these sorts are common in mindfulness exploration. Are there any associated mechanistic changes to the cognitive processes when the existential orientation changes? It will be interesting to see.

As you can see, many of the questions that Cathy asked haven’t been answered conclusively. However, I liked the questions themselves and I am sure they will have a life of their own.

Posted by Vinay Dabholkar at 3:11 PM