Can tradition cause brain damage? 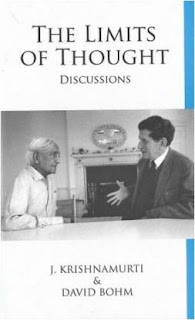 “Tradition is a form of brain damage” – is what physicist David Bohm and spiritual teacher Jiddu Krishnamurti agree upon in one of their dialogues in the book “The limits of thought”1. A few months ago I got an opportunity to facilitate a reading-and-reflection session on this dialogue and this sentence created discomfort among a few of the participants. They had valid points. Neither Bohm nor Krishnamurti was a neuroscientist. On what basis are they making such a claim? And neuroscience has advanced significantly in the last fifty years since they had this dialogue. Does it support it now? Let’s explore it in this article.

Let’s begin with the dialogue and then look at it through a neuroscience lens. Here is an excerpt from the dialogue:

DB: It occurred to me that tradition is a form of brain damage.

DB: Any tradition, good or bad, makes people accept a certain structure of reality, very subtly, without their realizing they are doing it, by imitation, or by example, or by words, just by statements. So very steadily the child builds up an approach in which the brain attributes things which are in the tradition to a reality which is independent of tradition. And it gives it tremendous importance. Tradition has real effects of all sorts, which may even be valuable in some ways. But at the same time it conditions the brain to a reality, which is fixed.

A person may look at that reality and say, “That’s reality, I‘ve got to keep my feet on the ground.” But this ground has been created by tradition, by thought; it is no ground, it has nothing under it at all. It is sustained and nourished by this damaged brain, which is unable to get out of that circle.

Typically, we associate brain damage with some kind of lesion, some physical damage to the structure of the brain. However, that is a limited view of brain damage. According to Karl Friston, a leading neuroscientist, there are two kinds of brain damages2. One is anatomical and the other is functional. He uses radio as a metaphor to illustrate the difference. Anatomical damage is like cutting off the wires in radio, while functional damage is equivalent to transistors becoming dysfunctional. A transistor is dysfunctional when the message passing through the wires gets broken. In neurobiology, such a failure is called neuromodulatory failure when the messages passed through neural synapses are not gated and/or weighted properly. This results in loss of gain control meaning loss of control in excitation and inhibition of various signals.

As Friston articulates, when the gain control is broken, it results in strengthening false beliefs because the inferences based on the sensory information get compromised. For example, should I carry an umbrella today? This question would be answered based on the weather forecast and the likelihood of rain. When beliefs become rigid, the information passing mechanism becomes dysfunctional and incoming information related to rain is either suppressed or considered unreliable similar to a transistor malfunctioning. So I may end up carrying an umbrella no matter what.

Perhaps what Bohm-Krishnamurti are suggesting is that tradition has the capacity to make certain beliefs so strong that they are no longer amenable for update based on contextual information such as weather forecast. Beliefs related to what dress to wear or not wear, what to eat or not eat, what rituals to carry out, whom to marry or not marry may become so rigid that they suppress the passage of contextual information.  They are treated as true and fixed no matter what. As far as certain beliefs are concerned, the brain becomes dysfunctional, fixed, and context-insensitive.

Thus tradition may cause functional brain damage. What Bohm-Krishnamurti say in the dialogue is that the damage may or may not be permanent. What could heal such damage? Krishnamurti suggests that perception or insight into the whole belief structure, its rigidities and how it is operating, in the form of thought, being stuck in a grove, may heal the brain. I am not aware of any scientific research supporting such a claim. However, work such as that of Catherine Kerr, supports a milder form of this claim. That is, a practice of shifting attention away from thinking into body sensations and breathing may result in making the neuromodulation mechanism more flexible. That is, it may improve the quality of information flow through the neural pathways.

1.      “The limits of thought”, J. Krishnamurti and David Bohm, Krishnamurti Foundation India, 2013, chapter 5 “Tradition and truth”, page 84. This dialogue happened on August 6, 1975, in Gstaad, Switzerland.  Bohm suggests that “Tradition is a form of brain damage” at 6:13 in the audio

2.      “Dysconnection hypothesis of schizophrenia”, August 10, 2017, In this video Karl Friston explains the nature of mental disorders and the possibility of a therapeutic cure of schizophrenia.

Posted by Vinay Dabholkar at 10:57 AM