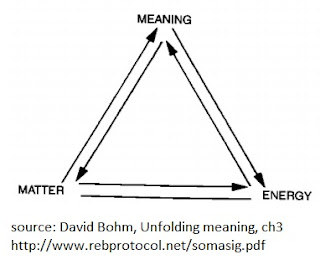 Mind-matter duality vs non-duality has been debated by philosophers and mystics since antiquity. However, scientists entered the discourse only recently. Hundred and fifteen years ago (1905) Einstein proposed matter-energy equivalence in a rigorous manner. It took thirty years to verify it experimentally. A few years ago I came across an extension of this equivalence that includes meaning along with matter and energy in a book “Unfolding meaning” (1985) which is an edited transcript of a weekend dialogue with David Bohm in 1984 in England (See the above figure). Bohm’s proposal of matter-energy-meaning equivalence was not a rigorous scientific presentation. However, it used scientific results as metaphors to explain it in an intuitive way. In his proposal, Bohm also puts meaning as more fundamental than matter and energy. A few years later (1990) John Wheeler, a towering figure in theoretical physics, proposed “It from bit” i.e. “All things physical are information-theoretic in origin”. Since then, over the past thirty years, this paradigm i.e. everything is meaning (or its close cousin - information) has gained momentum among the scientific community (e.g. check out Robert Kuhn episode "Does information create cosmos?"). In this article, I would like to briefly present Bohm’s proposal in his own words through six examples from his article “Meaning and information” (1989). And in the future, I hope to look at how others have explored this paradigm.

Meaning is the activity of information. Any form to which meaning can be attributed may constitute information. This is generally potentially active, and may become actually active when and where there is a receiver which can respond to it with its ‘own energy’.

(1)    The form is held in silicon chips, which have very little energy, but this form enters into the much greater energy of overall activities of the computer and may even act outside the computer e.g. in a ship or an airplane controlled by an automatic pilot guided by the information in radar waves.

(2)    DNA molecule constitutes a code and the RNA molecules ‘read’ the code and are thus ‘informed’ as to what kind of proteins they are to make. The form of DNA molecule thus enters into the general energy and activity of cell. At any given moment, most of the form is inactive, as only certain parts of it are being ‘read’ by the RNA, according to the stage of growth and circumstances of the cell.

(3)    When the form of a road sign is apprehended in the brain and nervous system, the form is immediately active as meaning e.g. if the traffic sign says ‘stop’, the human being brings the car to a halt.

(4)    A more striking example is that of a person who encounters a shadow on a dark night. If this person’s previous experience is such as to suggest that there may be assailants in the neighbourhood, the meaning of an assailant may be immediately attributed to this form. The result will be an extensive and powerful activity of mind and body, including the production of adrenaline, the tensing of muscles, and an increase in the rate of the heart. But if on closer inspection, this person sees further evidence indicating that it is only a shadow, all this activity stops, and the body and mind becomes quiet again.

(5)    According to the quantum theory, a single particle such as an electron shows wave properties as well as particle-like properties. Hence, a particle must be understood in terms of both the particle and the wave field which always accompanies the particle. This Schrodinger wave does not act like, for example, a water wave on a floating object to push the particle mechanically with a force proportional to its intensity. Rather, a better analogy would be that of a ship or aeroplane on automatic pilot guided by the information in the radar waves. Similar to radar waves, the waves associated with a particle contain active information.

(6)    For a collection of particles, there is a common pool of active information. This can be most clearly seen in the superconducting state of electrons in a metal. This is state that may arise at very low temperatures, in which an electric current flow indefinitely without friction. In this state, the common part of information induces an organized and coordinated movement of electrons resembling a ballet dance, in which the particles go around irregularities and obstacles without being scattered.

As the temperate is raised, however, the state of the system changes in such a way that the property of superconductivity disappears. The explanation for this is that the Schrodinger wave field begins to break up into independent factors representing separate pools of information that apply to similar subsystems and eventually at high enough temperatures, to the individual particles themselves. It is as if, in the ballet, the dancers begin to break up into separate groups that are guided by different ‘scores’ until eventually each individual is doing his or her own dance, unrelated to those of others. The coordinated state of movement to disappears, and the electrons behave more like disorganized crowd of people than like an orderly group of ballet dancers.

Meaning for whom? Meaning is for itself. Ultimately there is nobody to whom meaning is “for”. Rather, meaning is the basic quality of reality.

Intelligence is part of the process of perception of meaning. Creativity is related to a constant discovery of new meanings.

There is more to Bohm’s proposal than what is visible in these examples. For example, Bohm talks about how meaning flows from gross level in the matter to subtler levels and vice versa. For more information, please check out the references below.

I hope to explore how others have pursued this paradigm of treating information or meaning as the essence of reality. Your suggestions are welcome.

Posted by Vinay Dabholkar at 3:24 PM