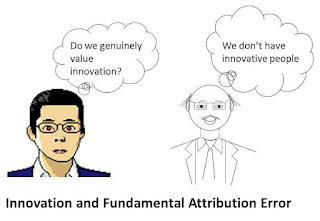 Imagine you are looking at the flow of ideas coming into your idea portal. You see the rate of ideas languishing for the past several months. What will you conclude? Will you, for example, feel that the employees don’t know how to think creatively and need some kind of training on tools / techniques for generating ideas? In case you feel this way, you may be committing what psychologists call fundamental attribution error. It is a deep-rooted inclination to attribute people’s behaviour to the way they are rather than the situation they are in. In this article, let’s explore how lack of ideas could potentially be a situation problem.

A few months ago I facilitated an idea generation session for a corporate finance team. The expectations weren’t high. Traditionally finance folks are the low scorers on the innovation activity. We thought of first gathering “top of the hat” ideas and then after 10-15 minutes when we begin to get long silence breaks, prompt with some leading questions. The session began with the manager highlighting the importance of small ideas and how when added up they can cumulatively create a large impact. It was pointed out that one of the participants has submitted an idea in the past and was recognized by the organization. And then the idea generation session began. And to my surprise, it continued uninterrupted for the next hour when 53 ideas were gathered. Many ideas were built on top of each other’s ideas. At the end, every participant among the 18 had given at least one idea.

What happened here? Did the participants become more creative? Did they learn any tool? No. What happened was that a space & time was created where idea generation was the primary focus. There were no other distractions. People were told by their manager that small ideas are welcome. And in this case people believed him. What changed was the situation not the people.

There could be several reasons why ideas don’t come into your suggestion box or portal. Here are a few:

Unresponsive: The system could be slow in responding to submitted ideas. For example, it might be several months before you receive any response. You lose faith.

Lack of transparency: Similar to Roger Smith’s experience you might get a “not selected” response with no further explanation. You don’t even know if there is a well-defined criterion and if so, it is being used.

Conflicting message: On the one hand, the campaigns may be saying that small ideas are welcome. One the other hand, top management rewards / mentions only BIG ideas. You doubt whether you have any BIG idea.

There are several ways to tackle these specific issues. Scott Cook of Intuit talks about how an environment of experimentation shifts the decision making related to idea selection from politics and power point to validation through low-cost high-speed experiments. This reduces the burden on the idea selectors and improves responsiveness. Similarly, organizations use social networking features – peers commenting, doing “like” on ideas to improve both transparency and speed of idea movement.

This does not mean that tools / techniques for idea generation are unimportant. In the organizational innovation ecosystem I identified learning & development as one of the five key dimensions. Besides, training programs also tackle the situation problem by bringing the people out of their cubicle and creating a space conducive for idea generation – irrespective of the tool / technique. The point is that we sometimes view training programs as the primary lever for improving innovativeness and ignore the other dimensions.

Next time when you label something as a people problem, ask yourself, "Am I committing the fundamental attribution error?"
Related articles:
1. It's the situation, not the person, 3:23min video by Dan Heath (YouTube)
2. Fundamental Attribution Error, wikipedia.org
Posted by Vinay Dabholkar at 8:40 AM