Is creative thinking an oxymoron? 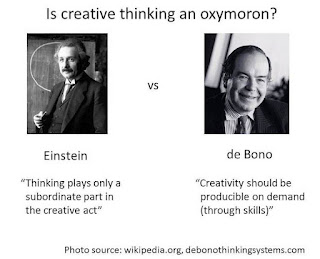 Eckhart Tolle quotes Einstein in his bestseller “The power of now” that goes – “Thinking plays only a subordinate part in the brief decisive phase of the creative act itself”. And then Tolle writes further, “So I would say that the simple reason why the majority of scientists are not creative is not because they don’t know how to think but because they don’t know how to stop thinking!” Contrast this with Edward de Bono, famous for his work on lateral thinking. De Bono is the proponent of creativity as a learnable skill and his thinking tools are part of school curriculum in over twenty countries. de Bono says, “Creativity should be producible on demand. Formation and design of new ideas can’t merely be left to chance.” Is creative thinking a skill that can be learnt like de Bono says or is thinking a hindrance to creativity as Tolle says? Let’s explore.

Let me start with one of my favourite stories on creativity in the last 25 years – Andrew Wiles proving Fermat’s Last Theorem on 15th Oct 1994 – a famous mathematical problem open for 350 years. This is how Andrew views the process leading to the moment of insight: “Often you write something down to clarify your thoughts. In particular when you’ve reached a real impasse, when there’s a real problem that you want to overcome, then the routine kind of (mathematical) thinking is of no use to you. Leading up to that kind of new idea there has to be a long period of tremendous focus on the problem without any distraction. You have to think about nothing but that problem – just concentrate on it. Then you stop. Afterwards there seems to be a kind of period of relaxation during which the subconscious appears to take over, and it’s during that time that some new insight comes.”

The intuitive thinking involves brain reaching out to a vast associative network of ideas already present in our memory. In the last one year before Andrew published his final proof, he had been struggling to solve one glitch in the proof that was discovered by one of the manuscript reviewers. The technique that finally helped Andrew overcome the issue was something Andrew had worked on and abandoned a few years ago i.e. the technique was present in his vast associative network of ideas all the time he was struggling. He remembers the moment, “I couldn’t understand how I’d missed it.”

Kahneman advocates following definition of creativity attributed to Sarnoff Mednick: Creativity is associative memory that works exceptionally well. Mednick’s definition of creativity connects both Tolle and de Bono. When Tolle says that thinking should stop, I feel he means that the interference due to the slow mode of thinking (system-2 or rule governed) should stop and let the intuitive thinking take over. Similarly, de Bono’s six thinking hats technique is trying to help you reach out to those areas of your associative network that you will not go to in the normal course.

In short, whether creative thinking is an oxymoron would depend upon the type of thinking involved.

Einstein quote from “The power of now” by Eckhart Tolle, p 20

Kahneman’s definition of creativity is from his “Thinking, fast and slow” p 67