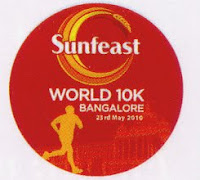 Thanks to my wife Gauri who managed a last minute spot registration for me last Thursday, I ran 10K in this morning. This was my second 10K run. I wrote about the last one two years back. I took 1 hr 10 minutes in 2008. I was hoping to do this one under an hour. I wish I could say I achieved my goal. I didn’t. But my timing of 1 hr 2 minutes came pretty close. Gauri did well too with a timing of 1 hr 11 minutes. It was certainly a personal breakthrough for me. I have mentioned earlier that I feel innovation is more like a marathon than a sprint. What did I learn in this 10K run that is applicable to innovation as well?

It would be cool to say that I don’t do any regular exercise and land up at Kanteerava stadium every year for the 10K run and do well. But that isn’t the fact. In the last six months I and Gauri had two Sunday morning runs which were at least 6km. I am also doing 5K once a month on the treadmill for the past few months. But what is perhaps most consistent is my 2-3km run twice a week for the past 22 years! That’s a little over half my age.

Breakthrough innovation is a noble goal. It is sexy and perhaps easier to get funding approved for. After all, who doesn’t like to show that they can hit sixers like Nano-iPod? Unfortunately, aiming for a breakthrough innovation without building relevant internal capabilities is like running long distance without building relevant stamina. You may be lucky and finish it. But chances are high it won’t sustain and it could also result in an injury. Remember Motorola’s situation after the successful Razr?

There are two things about today’s run that I find interesting. One is about an experience that is not new to me but still I find it fascinating every time I experience it. It is about “finding a rhythm”. I was lucky to find it this morning. Once I found a rhythm, everything seemed easy. Perhaps it is true for innovation as well and I mentioned about it here earlier. The second thing is an experiment I tried. I set a goal – something Heath brothers call “Black & White goal” in their book Switch. The goal was “not to walk during the run”. A slow run is ok but not a walk. I thought it worked pretty well. According to Heath brothers, a B&W goal doesn’t leave any room for the analyzing part of our brain.

Could I have predicted my performance in today’s run? Again, it is tempting to say that I saw it coming. It isn’t true. In spite of all the preparation, it could very well have been a bad day – a cramp in the stomach or pain in the knee – both of which I have experienced before. There is always an element of chance which is beyond my control. But today the chance was high that I would have finished the run within 1 hr 15 min. I salute Louise Pasteur for saying, “Chance favors the prepared mind”.
Posted by Vinay Dabholkar at 8:10 AM