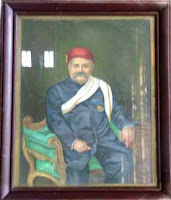 We looked at the innovations from Rancho (Amir Khan) in “3 idiots”. Well, there was also a “Real Rancho” a Babu turned dashing entrepreneur who put the city of prominently on the map of industrial . Let’s look at how Ranchhodlal Chhotalal (1823-1898) went about setting his cotton mill.

1. A project was promoted by a group of merchants in in 1847. Their idea was to use modern technology to product cotton goods. Some Englishmen working or living in acted as their technical consultants. The project, however, did not go beyond the conception stage as the promoters developed cold feet even before the first concrete steps were taken.

2. Ranchhodlal Chhotalal was a highly educated man well versed in Persian, English, Sanskrit and Gurajarati. He had risen to the highest position in government service to which an Indian could at the time aspire. Ranchhodlal came to know of the aborted project from one of the British officers Captain Goerge Fulljames.

3. In 1850 Rachhodlal obtained technical details of the project from Fulljames and proposed to set up an industrial dream for producing cotton goods. He joined hands with an English cotton planter, James Landon, who offered to contribute half the capital required provided Ranchhodlal arranged for the other half. A couple of bankers agreed to invest but eventually backed-off due to their mistrust in Landon. Landon withdrew and project didn’t take off.

4. In July 1854 Cowasji Davar from floated the first cotton mill, the Bombay Spinning and Weaving Company with a share capital of Rs. 5 Lakh.

5. In the meantime, Ranchhodlal restarted his effort of starting a cotton-mill in Ahmedabad. This time he succeeded in convincing investors and registered the Ahmedabad Spinning and Weaving Company in 1859 – close to a decade after he conjured up his dream. The capital involved amounted in the first instance to one lakh of rupees and the mill contained at first 2,500 spindles only and no looms.

6. A number of factors contributed to the delay between the foundation of the mill in 1859 and its actual opening in 1861. One, Suez canal had not opened and all vessels from had to sail via the . Second, the ship carrying the machinery for the new mill caught fire and was lost at sea. It was insured and fresh machinery was ordered. The English engineer who came for building the mill, C. Dall, died before the machinery arrived. The machinery had to be transported from to Ahmedabad on bullock carts.

7. After unsuccessful engagements with four European engineers, one Edington completed the work and served for two years from 1861 to 1863 and put the whole mill into good working condition.

8. Initially the mill barely paid a dividend of six percent. Hence, additional capital was raised to increase the number of spindles from 2,500 to 10,000 and to establish weaving department with 100 looms. This increased the dividend to nine percent and substantial fund was carried over to reserve fund.

9. Subsequently, Ranchhodlal built second mill in 1872 containing 14,500 spindles. The mill prospered until 1875 when a disastrous fire destroyed practically the entire building which was uninsured. Ranchhodlal rebuilt it with his own expenses within a short time of a year.

There are four things that I find interesting in this story:

1. Collaboration with British: Unlike his peers Ranchhodlal built successful partnerships with Britishers in raising money as well as gaining technical know-how. His government service helped.

2. Successful demo: Let’s define success demo is that milestone when the investors actually put money. This happened for Ranchhodlal in 1858-59. And it did not happen because Ranchhodlal showed any prototype or demo. It happened because Davar showed that the model works in and that boosted the confidence of the investors. It’s like saying, “Look, I can do it here because, he has done it there”. And the same logic didn’t work when “here” meant Ahmedabad and “there” meant .

3. Role of insurance: There were two Black Swan events each could have potentially crippled the whole business depending upon circumstances. First one when the ship carrying machinery caught fire and the second one when the second mill was burnt. Insurance helped in the first one and Ranchhodlal was rich enough by the time second event happened.

4. Finding optimal scale: As the first mill started operations Ranchhodlal figured out that 2,500 spindles are not enough and the mill needs looms too. When the spindle count was increased to 10,000 and 100 looms were added, the divided reached a respectable nine percent.

Ranchhodlal also did significant contribution to building infrastructure in city when he was the President of Adhmedabad municipality. This is how Florence Nightingale praised him, “Ahmedabad is working splendidly at water supply and sewerage under its native president Mr Ranchhodlal Chhotalal... we hope the good example will be followed by other cities.” 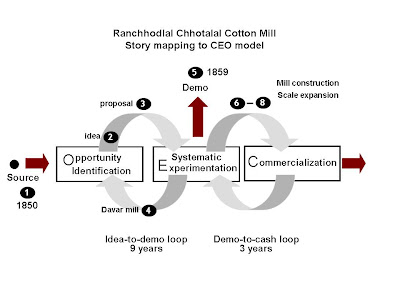 Source: Memoirs of Rao Bahadur Ranchhodlal Chhotalal by S. M. Edwardes and Concise Oxford history of Indian business by Dwijendra Tripathi and Jyoti Jumani
Posted by Vinay Dabholkar at 11:15 AM