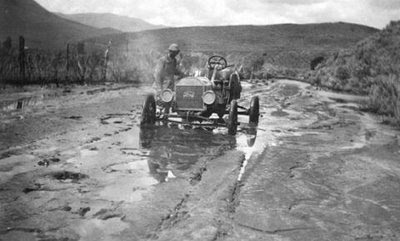 Blue ocean: This month, 1st October to be precise, marked 100th birthday of Ford Model T. It was 100 years ago that Ford Motor built the very first of the iconic gasoline-powered automobiles to be sold. By the time formal production halted in May 1927, more than 15 million had been built. Model T created a blue ocean, a new market for affordable cars built through standardization. Till then the custom made cars cost around $1500, twice the average annual family income. In 1908, the first model T cost $850. In 1909, it dropped to $609 and by 1924 it was down to $290. In comparison the price of a horse driven carriage, the car’s closest alternative at the time, was around $400.

Challenges: I liked this tour of Model T pictures. I particularly liked the above picture as it depicts difficulties associated with blue oceans. While the cars came out, roads weren’t ready. I am sure the same would be the case with gas stations and service stations. Creating an eco-system in the new market while continuing to make profits is a characteristic of blue ocean winner.

Ocean turns red: Over the years, blue ocean starts turning red (competitive) and from it new blue oceans are created. For example, in 1924 GM introduced "a car for every purse and purpose" and in the 70s Japanese introduced small, fuel efficient cars. Today, the ocean has turned bloody red (fiercely competitive). Ford and GM, the heroes of the automobile revolution, are struggling to keep afloat. And yet, out of this red ocean, a player called Tata Motors is trying to create a blue ocean for ultra low cost cars. Perhaps one of your great grand daughters will create a similar picture gallery of Nano in 2109.

Posted by Vinay Dabholkar at 5:46 PM