What innovation programs can learn from Quality Circle (QC) activity

I got an opportunity to attend 24th CII QC Circle Convention involving finalists from 4 states in South India (Tamilnadu, Kerala, Karnataka and Andhra) held in Le Meridien on Dec 20, 2011. Each of the 15 participating teams had already excelled in the statewide competition. They were representing companies like Amar Raja, Ashok Layland, BEL, Kancor, Kochi Refinery, Lucas TVS, Rane Madras, Toyota-Kirloskar etc. My objective for attending this event was to understand (a) How does QC activity happen in manufacturing industry in ? (b) What can innovation programs learn from it? Here is my take:

A Quality circle is a volunteer group, a team of four to seven workers with the possible inclusion of their supervisor that understood the methodology of identifying and solving problems. For example, one of the teams named “Gold Star” had five members aged between 23 and 55 years. Two of them were 10th standard, two had PUC and one had Diploma in Mechanical Engineering. Four of them were machine operators and one of them was a Quality auditor. The team had a patron who was a manager.

From their presentations, following things struck me as worthy of emulating by innovation programs in other sectors.

1. Team activity with gamification: QC circle is a team activity. Contrast this with the suggestion schemes where individuals are the heroes. Each team identified problems, set goals and systematically went about solving them. Weekly/fortnightly one hour was reserved for this activity (e.g. every other Wed 3-4pm). A typical project lasted 2 to 5 months. Each team had created an identity – some called themselves Kadamba warriers, some were Red Chillies, others were New Millennium etc. Each team competed against others within the company to do better at innovating within their environment. In at least some of the participating companies it was a decade long initiative with 100% participation as shown by the picture below.

2. Problem selection criteria: Selecting which problem to solve is given a lot of importance in QC activity. All the teams presented the list of problems they identified first – about 50 to 70. A commonly used technique for selecting the problem was called SQPC analysis. It meant to rate each problem on 4 dimensions – Safety, Quality, Productivity and Cost. In some cases these parameters were crisply defined. For example, safety – zero accidents, quality - < 2 defects per vehicle, production – MTBF > 3 hrs by Mar ’12, cost – 5% saving in allocated budget. See the picture. Depending upon the scope of innovation, this criterion may vary. However, it makes sense to identify some criteria in selecting problems to solve. 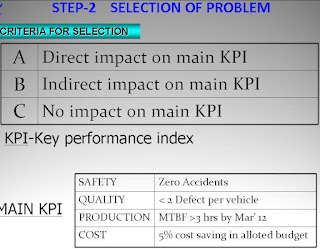 3. Genchi Genbutsu: This is a Japanese phrase meaning “go and see for yourself”, which is a central pillar of the . Genchi genbutsu is sometimes referred to as “get your boots on”, which has a similar cadence and meaning. Toyota-Kirloskar team presented how they did brainstorming at workplace to identify and solve the problem better (see the picture). This is similar to immersive research of P&G. 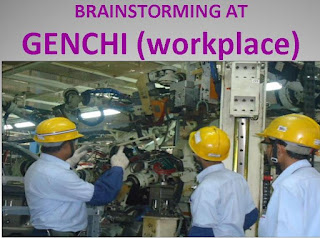 My learning: I derived following learnings for the innovation programs: (1) They can introduce innovation as a team sport - it just makes it more fun. These teams could be Communities of practitioners (like Java / SAP developers) or theme based teams (e.g. sustainability). The teams could compete based on a simple scoring mechanism (no of ideas submitted, no of prototypes demonstrated, no of ideas implemented, business impact etc). (2) Organizations can help innovators in developing a challenge-book. Similarly, organizations can define strategic priorities for selecting problems where it is willing to make non-trivial investment. These could be specific technology areas, customer segments or consumer/social/regulatory trends (3) Organizations can make “immersive research” an important aspect of problem understanding and solving. For example, Intuit’s “follow-me-home” or P&G’s “Living it, working it” programs do this.

Note: Thanks to Prof. Rishikesha Krishnan for the suggestion to make the learning explicit.

Posted by Vinay Dabholkar at 12:04 PM