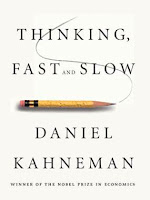 “Thinking fast and slow: Conversations with Kahneman” interview at London School of Economics”
Posted by Vinay Dabholkar at 12:50 PM