Cabbages and Condoms: Story of how Mechai gives something to talk about 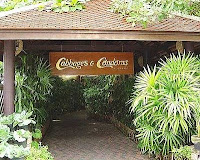 Imagine yourself visiting a Thai restaurant “Cabbages and Condoms” over a weekend with your friends. Apart from relishing excellent Thai food you enjoy looking at beautiful lampshades, clothing items, table settings and other decorations, all made out of condoms. At the end of the meal, along with coffee, instead of mint, you get … you guessed it. Now, we don’t need Sherlock Holmes to predict that you will be talking to your family and friends about this visit for the next few days or perhaps weeks. Emanuel Rosen calls this principle “Giving something to talk about” in his book Anatomy of buzz that explores how buzz is created and spreads.

“Cabbages and Condoms” is a restaurant chain based in Bankok and run by an NGO Population and Community Development Association (PDA). Mechai Viravaidya started this NGO more than a quarter of a century ago and he was awarded 2007 Gates Award for Global Health by the Melinda and Bill Gates Foundation. As Rosen says in his book, Michai is a master in creating buzz. Here is a story of how Michai “gave something to talk about” in a lecture on family planning delivered to two thousand teachers in Bankok in 1974 (i.e. 35 years ago!). (source: Anatomy of buzz)

As Michai started talking about various methods of birth control, he noticed that he was getting a lot of blank looks. People looked either self-conscious or bored. This is what Michai did: He pulled out a condom from his pocket and said, “Let’s open it up. A lot of you maybe heard about condom but have never seen it or touched it.” He tore its packaging and started talking about alternative uses of the condom. He said, “It could be used carry water, cover a barrel of a gun, tie your hair. It can also be used as a balloon.” And he started blowing into his new toy. He says, “It was like magic. One minute they were sitting there looking stiff and self-conscious, and the next they were roaring with laughter.”

He asked his staff to distribute sample condoms. Some in the audience had no problem; others were more reluctant. He didn’t let them off the hook. He said, “The condom is really clean if your mind isn’t dirty. If you have a dirty mind, please don’t take one.” Then he invited those with the “cleanest minds” to join him onstage for a condom-blowing contest. Dozens of teachers ended up onstage. Michai said, “On count of three, start blowing your condoms. The one to blow up the largest condom in one minute will win a year’s supply.” Two thousand people were laughing uncontrollably. Imagine what a buzz this event would have generated!


To quote Chip and Dan Heath’s “105% rule” from Give’em something to talk about: From a word-of-mouth perspective, it is virtually impossible to discuss an experience that is 5% better than the norm on all dimensions. When you are preparing a presentation, ask yourself, “What am I giving the audience to talk about?”
Posted by Vinay Dabholkar at 5:07 PM