Ramalinga Raju, Indira Gandhi and the metaphor of “Riding a tiger” 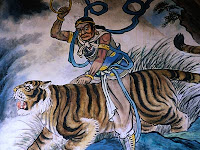 Mr. Ramalinga Raju, Chairman of Satyam, has written a letter about the sequence of events that led him to create and maintain inflated account books for his company for several years. What I found most surprising was the metaphor he used to describe the state of his mind. He writes:

What started as a marginal gap between actual operating profit and the one reflected in the books of accounts continued to grow over the years… Every attempt made to fill the gap failed. As the promoters hold a small percentage of equity, the concern was that poor performance would result in a take-over, thereby exposing the gap. It was like riding tiger, not knowing how to get off without being eaten.

When I read this I was reminded of the description of a meeting between ex-Prime Minister of India, Indira Gandhi and a spiritual leader Jiddu Krishnamurti day before Indira Gandhi took off the emergency. The meeting is described in a biography: Indira Gandhi: A biography by Pupul Jaykar where Indira Gandhi describes the state of her mind:


I am riding on the back of a tiger…I do not mind the tiger killing me, but I do not know how to get off its back


Perhaps it starts with what Peter Senge calls a learning disability in Fifth Discipline: Illusion of taking charge in facing difficult problems. As Peter describes, what is typically meant by this is that we feel we should face to the difficult issues, stop waiting for someone else to do something, and solve problems before they grow into crises. All too often, proactiveness is reactiveness in disguise. True proactiveness comes from seeing how we contribute to our own problems.


Posted by Vinay Dabholkar at 3:18 PM