Why does Daniel Kahneman refuse to advise individuals? 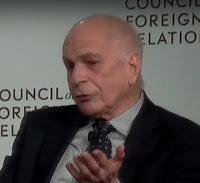 I have been a big fan of Daniel Kahneman and his work for over a decade. And the admiration has only grown over the years. However, there is an aspect of his position that puzzles me. Kahneman has been consistent in saying that his work on biases, beautifully captured in “Thinking, fast and slow”, is not of much use to individuals. Because, he feels, his thirty years of research hasn’t helped him become better at decision making. And yet, I find Kahneman demonstrates high degree awareness of potential biases in his thinking while answering interview questions. Isn’t that awareness an important element of good decision making? And could that be a result of internalizing his work? So, why does he refuse to advise individuals? I would like to explore it in this article.

First, let’s see Kahneman’s position – Here is an excerpt from his interview for Council on Foreign Relations streamed live on April 18, 2017  (video embedded at the end of the article) – he was asked (15:41):


Kahneman: When you talk to an individual, I refuse to answer that question. Because how little studying this problem has done for the quality of my decisions.

Q: You don’t think you make better decisions after the last thirty years?

And then he turns to discuss organizations and how they can improve their decision making. And leaves the question of helping individual decision maker unaddressed.

Why does Kahneman refuse to advise individuals? We get some idea as he explains how he sees our thought process works in the beginning of the same interview (1:10). He says:

The claim in the book is that we are conscious of our conscious thoughts, we are conscious of our deliberations. Most of what happens in our mind, happens silently. And the most important things in our mind happen silently. We are just aware of the result, we are not aware of the process. The processes that we are aware of tend to be deliberative and sequential. But the associative network that lies behind all that and that brings ideas forward into consciousness, we are not really aware of.

Since we are aware of only the result and not the process, how could we ever improve our decision making? The cognitive biases that we carry are perhaps so deep rooted and intertwined with our memories in such a complex networked way that we have no access and know-how of improving them. Having said that, I find Kahneman himself extremely conscious of his potentially biased thinking process. For example, when someone asked him (26:20), “Do you feel good history is possible or are we doomed to confirmation bias?” Kahneman begins his answer by saying, “It is hard for me as an outsider to define what good history would be like.” That’s accepting ignorance of the definition of good history upfront. When someone else asked him (42:50), “Does diversity make for better decision making?”  He begins by saying, “Well, I really have no expertise in that and I am relying not even on primary sources…” and then gives a view. That’s admitting lack of expertise upfront. Later on while addressing a question on climate change denial (50:30), he admits that he believes in climate change because he believes in National Academy of Sciences which, in turn, believes in climate change. So his belief is based on what people he trusts believe in. It is an example of a Nobel Laureate scientist explaining the non-scientific manner in which his belief system works.

Now, this self-doubt is evident in not just one interview but all of Kahneman’s interviews that I have watched. And I have watched at least half a dozen hour long interviews. This kind of checking the quantity and quality of information before giving an answer is a hallmark of his thinking process. His intuitive answers may be susceptible to biases but his alertness about the possibility of a bias is very strong. And it is hard to believe that it is not influenced by his work.

Of course, interviews may not be a stressful situation for Kahneman. And, as he says in his book, the real test of your alertness is in stressful situations. He mentions in the book – “Questioning your intuitions is unpleasant when you face the stress of a big decision. More doubt is the last thing you want when you are in trouble.” So perhaps I am generalizing about Kahneman’s thinking process based on how he answers interview questions. And that may not be correct generalization.

I differ from Kahneman in following way. I feel that I may not be aware of the exact biases taking place in my fast, automatic, intuitive thinking process. However, if I carry awareness that it could be wrong due to inherent biases, that’s enough for creating an opening to listen to other views. And “Thinking, fast and slow” carries the potential to send that message to individuals. And it’s possible to cultivate alertness even in stressful situations. At least, that’s my experience. And, of course, I could be wrong!

Image source: YouTube video embedded above
Posted by Vinay Dabholkar at 8:32 AM