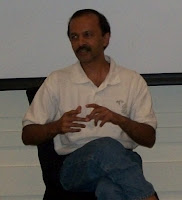 V R Prasanna was one of the panellists at the “Enabling a culture change” session at the Next Gear workshop on innovation leadership I facilitated in July. Prasanna is the CEO of Sikshana Foundation which was rated among the top three in India in education intervention by Times Social Impact Awards (Sept 2011). Prasanna moved back from the US to India in 2007 to help scale up the organization. In this interview Prasanna shares his experience in enabling a culture change in the context of rural government schools.

A sample question & answer is given below. You can find the complete interview here

Q: What roles rewards play in change initiatives?
Prasanna: In our case, we found that the easiest way to motivate a teacher is a pat on the back. They work in a system where nobody cares about them. One of our initial experiences was with a teacher in a remote school –  with 12+ years of service. When we asked him , “Sir, how are you doing?” The teacher almost had tears in his eyes. When we asked, “Did we say something wrong?” He said, “First time in 12 years in this school, somebody has asked me how I am doing” That is the simplest form of reward. On the other end, we send teachers to the US. Someone who might not have seen Bangalore goes to the US and spends four weeks there.

We find rewards play a similar role for a child to change. In rural setting, when children go back from school, they dump their bag and immediately run out. Because there is nobody at home to share their school experience. To sustain the change, something needs to happen outside the school environment. How do we do this? We can’t become the parents. But the child has to be rewarded at some basic level. So we introduced something called a “spot prize” in classrooms.

Every teacher is equipped with nominal amount with which they buy something and give it away. This is one of our most successful programs. We don’t spend more than Rs. 30 per child in the whole year. We have introduced stars which they can wear on their uniform. And once they collect ten stars they redeem it for something – crayons or pencil set or they can hold on till the next ten stars and get a geometry box.

This idea (of stars) came from a teacher. I had gone to a school near Hubli. We had given spot prizes to be awarded in the school. This teacher had written some names and some numbers next to it. I asked, “What are these numbers?” The teacher said, “I liked your idea. But I run out of prizes very quickly. Attendance is a huge issue. So I have to give them more. So whenever a student asks a good question or a correct answer I start writing points. This becomes more like a game and it is getting everyone to participate actively in the class.” The next question was, “How can we do this at a systemic level?” and the star system evolved.


So I feel rewards play a huge role in sustaining a change at least in our space.

Posted by Vinay Dabholkar at 9:23 AM