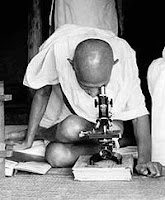 Why is right to experiment important? Experimentation is at the heart of innovation. If you want to foster a culture of innovation, you would need more people come up with ideas and the perform experiments to test various assumptions associated with the ideas. How did Gandhi view this in his Ashram? Let’s start with his first Ashram – Tolstoy Farm in South Africa.

Tolstoy Farm operated under strict rules. What to eat and what not to eat, what mode of transport to use to go outside the farm, what time to sleep etc. was already decided. The rule was that if are traveling outside the commune for an errand or shopping trip for the commune then you could travel by train, third class. However, if you are going out for personal reason, it had to be walking. Gandhi still had legal cases and used to walk 21 miles to visit Johannesburg.

In one incident a young man made fun of two girls at Tolstoy Farm. Gandhi ‘as a warning to every young man’ cut long hair of the two girls. Manilal, Gandhi’s son, was already a teenager. He hadn’t undergone any formal education. And he wasn’t permitted to either. In fact, in a letter written to Manilal from a prison in South Africa, Gandhi justifies his position. Gandhi writes, “I know too that you have sometimes felt that your education was being neglected. … I have been reading Emerson, Ruskin and Mazzini. I have also been reading the Upanishads. All confirm the view that education does not mean a knowledge of letters but it means character building”. Note that the person preaching this is himself educated in England. In the words of Gandhi’s biographer Louis Fischer, the letter effectively said, “Your life remains tied to mine; you cannot go your own way.” Manilal, in fact, wanted to become a lawyer or a doctor. In short, you had little scope of experimentation if you were at Tolstoy Farm. Gandhi was by then 40 years old.

Fast forward a decade and now Gandhi and his followers are living at Sabarmati Ashram. Gandhi writes about his wife Kasturbai, “Ba takes tea in spite of the fact that she lives with me. She also takes coffee. I would even lovingly prepare it for her.” So looks like there is some change in the attitude. Maganlal Gandhi was running a laboratory performing khadi experiments at the Ashram and reporting his findings at Young India newsletter. In fact, an open challenge was announced in 1919 for “the spinning wheel capable of turning out yarn five times the quantity turned by the common wheel”. The winner was to get Mr Rewashanker Jhaveri’s prize of Rs. 5000. Six entries were received from places like Baroda, Sialkot, Beneras etc.

Fast forward a couple of more decades and now the khadi movement had evolved into All India Village Industries Association (AIVIA). On December 30, 1938, Gandhi went to Wardha to inaugurate Magan Museum. Apart from khadi-related models, the exhibits included miniature models of various types of oil presses and contraptions used in paper making and oil-pressing and leather tanning industries. Gandhi said, “I would like you to regard the Magan Museum and the Udyog Bhawan not as the old curiosity shop, but as a living book for self-education and study”.

Looks like Gandhi’s view on RTE evolved. It started with no RTE at Tolstoy Farm to a couple of selected disciples experimenting at Sabarmati to a group experimenting at AIVIA. However, it never became his forte. I haven’t come across his concern that not enough people at his Ashram or in India are experimenting. But I could be wrong. Perhaps it is difficult to excel as a solver and a capacity builder at the same time. What do you think?

Gandhi with microscope photo from wikipedia.org.
Posted by Vinay Dabholkar at 2:48 PM