Searching the source of "low-cost car" idea in India 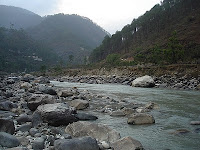 “Don’t go looking for the source of a river” goes a saying in my mother tongue – Marathi. A BBC documentary does exactly that as it traces the source of river from Gangotri to Gomukh to a trickle up the snow peaked mountains. As the documentary shows the real source is usually far more obscure and mostly impossible to find. Perhaps the same principle is applicable to ideas. The closer you look at an idea, you start seeing some other idea(s) which was a source for this idea. In this article, I will try to do to the idea of “low-cost car in ” what BBC did to river .

Today low-cost car in is synonymous with Tata Nano. From mid 80s to 90s, it was Maruti 800. In fact, Maruti 800 was used as a reference while designing Nano. Where did Maruti idea come from? R. C. Bhargava, Chairman of Maruti Udyog Limited (MUL), tells the history of the car in his book “The Maruti story”. It is the first detailed biography of a product developed for Indian market that I have come across. Where did Maruti idea come from? It leads us to a different Maruti.

In November 1970, the Cabinet decided to manufacture a small car in public sector and discussions were held with foreign car makers, including Renault, Ford and Nissan. However, the estimate of Rs. 57 crore as initial investment turned out to be too much for the time. Instead private entrepreneurs wanting to manufacture a low-cost car were talked to. Eleven letters of intent were issued, one of those receiving the LoI was Sanjay Gandhi. Out of the 11 LoI, only three were converted into industrial licenses. Apart from Sanjay Gandhi, the other two went to Manubhai Thakkar of Vadodara and Sunrise Auto Industries of Bangalore, perhaps non-serious players by design.

Ever since his return from , Sanjay had been obsessed with the idea of making a small car. He along with Captain Tillu an instructor at Delhi Flying Club, set up a workshop in 1966 in Gulabi Bagh, a congested locality in north . The workshop had minimal equipment and two mechanics. Maruti Motors Limited (a private company) was registered in 4 June 1971. Later Sanjay acquired 297 acres of land for Maruti in Gurgaon for Rs. 35 lakh. A prototype of the car was demonstrated at the India International Trade Fair in 1972. Another prototype was sent for testing to the vehicle research department of defence ministry, which gave it the certificate of roadworthiness. The car was test driven in Jammu & Kashmir, Rajasthan, Haryana, and Uttar Pradesh. Sevety-three dealers were appointed and each had to pay a deposit. Commercial production never started.

It was an impossible proposition considering the need to manufacture and procure all the required components, including gearbox and engine, locally. Two things shifted the priorities away from the project: First, the national emergency which came into force in June 1975 and subsequently Janata Party came to power in Jan 1977. And second, the aircraft crash on 23 June 1980 that killed Sanjay Gandhi. Sanjay's unfinished dream acted as an emotional force for Indira Gandhi to push government to start a small car project called Maruti Udyog Limited incorporated on 24 Feb 1981. Was Sanjay's Maruti Motors the first low-cost car project in ?

In late 1950s government formed an Ad Hoc committee on the Automobile Industry under economist L. K. Jha to look into the possibility of manufacturing a low-cost passenger car. It was meant to cater to those whose monthly salary with below Rs. 1,000. The committee, dubbed the Cheap Car Committee, studied different models and collaborators and submitted a report in 1960 laying out the criteria that should decide the model. The committee received 24 proposals from various firms including Hindustan Aeronautics, Renault, Hindustan Motors, Premier Automobiles, Telco (now Tata Motors). However, the tenure of the committee was over before it could take any action.

Does it really matter where the source of an idea is? What matters a lot more is how much impact the idea eventually makes, just like river .
Posted by Vinay Dabholkar at 4:44 PM