iPhone and Blackberry: Competitors and Complementors 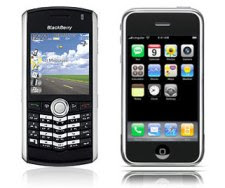 Research In Motion (RIM), the maker of Blackberry smartphone saw its profit more than double last quarter (see news in Economic Times). And you know what is believed to be the reason for this success? iPhone.

“What?” one may ask. iPhone, after all, is the competitor of Blackberry. How can it boost Blackberry sale? Apparently, popularity of iPhone has brought attention to “smartphones” and more people are starting to use them. And then people started asking, “Why should I buy a non-smartphone like Razr when I can buy a Blackberry or an iPhone?” This has boosted the smartphone market. Of course, it has benefited Apple. But then it has benefited RIM too.

This very phenomenon is explained beautifully by Barry Nalebuff and Adam Brandenburger in their book “Co-opetition” published in 1996. Barry and Adam talk about the dual roles companies play: competitors and complementors. A complementor is the player who contributes in increasing the size of the pie (i.e. your target market) and a competitor is the player with whom you have to share the pie. Your share is typically referred to as “market share”. Many times, a single player plays dual-role i.e. the player is your competitor and complementor at the same time and you don’t know which role is making a bigger impact to your business. As in the case of Blackberry, Apple played much bigger role as a complementor than as a competitor last few quarters. As an analyst has said, “iPhone was the single biggest blessing RIM ever had.”

Barry and Adam give numerous such examples in their book. One such example which they talk about 12 years ago more as a prediction and which I believe is a reality today is that of electronic bookseller like Amazon.com. When e-booksellers came in 90s, traditional bookstores saw them as competitors. But then the e-booksellers contributed in increasing the size of the pie significantly. And traditional bookstores benefited from it too. I, myself, purchase books from Amazon.com. But then, I also read reviews on Amazon and then go and buy the book from Gangarams or Landmark bookstore. Thus Amazon ends up contributing to increasing overall book-readership and traditional bookstore like Gangarams benefits from it too. The way bookstores have mushroomed in Indian metros is a testimony of this phenomenon.

Won’t Tata Nano impact the sale of Maruti Alto? Of course, it will. But don’t be so sure, which way the impact will be. Don’t be surprised when you see a headline, “Nano was the single biggest blessing Alto ever had.”
Posted by Vinay Dabholkar at 5:39 PM